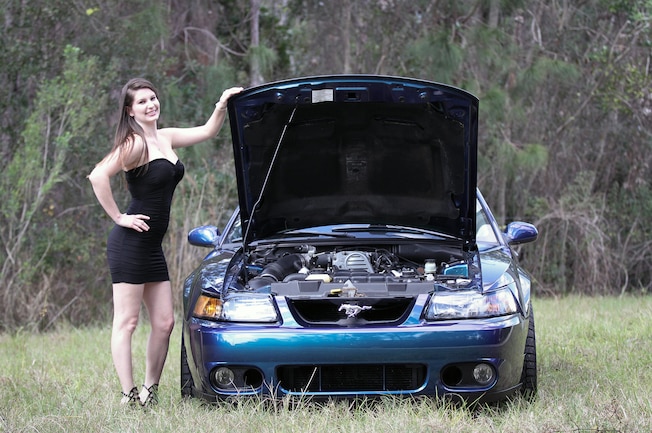 This week's Mustang Girl Monday is Jessica Kemp, aka 2vGirl.

Jessica's love affair with Mustang started at a young age. She said, "I fell in love with Mustangs when I was a little kid. My first memory with the Mustang was when my friend's mother got a new one (I may have been a little jealous). I enjoyed getting to ride in it with my friends to different places. I always said that when I grew up I would own a Mustang."

Jessica told us how she made that dream become a reality. "When the New Edge body style came out I immediately fell in love and to this day, it is my favorite body style. After graduating college and starting my career as a massage therapist, I saved my money and got a 2002 Mustang GT. After buying the GT, I made new friends and started learning more about cars and how to work on them. One of my friends got a vanity plate for his Mustang and it gave me the idea to get one made as well - that's how I came up with the "2V GIRL" plate. 2vgirl was my name on Instagram and whenever I would go to local car shows everyone knew me as 2vgirl with the green Mustang."

But Jessica, never one to fear change, needed something new. She told us, "I got bored with it, so I had my friend swap it from automatic to a 5-speed. Then I got bored with it again because it was slow. My friend had a truck that I loved so I looked for the same one to buy and ended up with a 2002 Ford F-150 Harley Davidson. I was happy with both of my vehicles but my dream car was still a 2004 Mustang Cobra. I ended up selling the truck to search for my dream car- a stock, clean, and low mileage Cobra. After a year and a half of searching, I finally found a 2004 Mystichrome Cobra. The car was everything I wanted—stock, clean, and low mileage and now it's mine. The Cobra is #1291 of a build of 3,768, and #821 out of 1,010 Mystichromes. I ended up selling the GT to get a newer, daily driver. Some people mess with me because I had to transfer the "2v GIRL" plate to the Cobra- yes, it'll be changed soon!"

Follow Jessica and her every changing garage at facebook.com/2vgirl. Each week Team Mustang Girls features a different female Mustang owner. Submit your story at http://teammustanggirls.com/submit-your-mustang-story/.