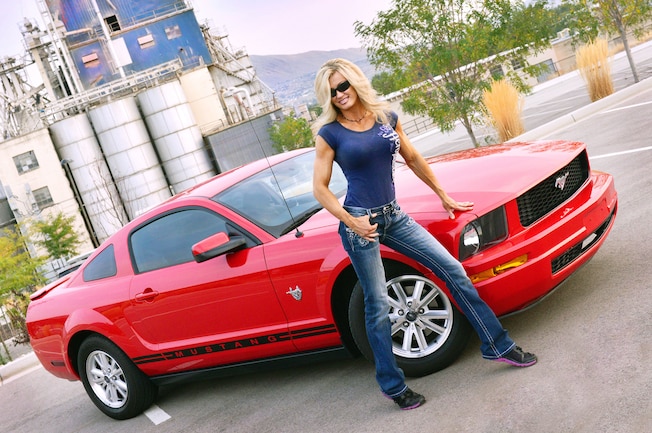 This week’s Mustang Girl Monday is Lisa McElmurry and we have to say she has some great taste in Mustangs!

Come along for the ride as she tells us her story, "I’ve been a fan of the Mustang since my age was in the single digits. I can remember going through car magazines and always loved seeing the beautiful photos of my favorite Mustangs. The ‘60s classics were always my favorite, especially the 1969 fastbacks. Today it’s still at the top of my list as the best looking Mustang ever made."

Lisa continues, "Fast forward to when I got to my teen years and it was time to buy my first car. I knew what I wanted and that was a ‘60s Mustang! My father helped me in my search. I ended up with a 1969 Mustang with a 302 and automatic. It was light yellow and in pretty good condition, but definitely all stock. I had it for about a year when I decided I wanted something newer that would require a little less maintenance so I sold my ’69 and purchased a 1984, white with deep red interior, Mustang convertible in mint condition. I drove that car for several years and have a lot of fun memories. I ended up selling it after I was married. I went the space of about 16 years before I would buy another, a Torch Red 2009 45th Anniversary edition Mustang. It was originally purchased to be a commuter car but I fell in love with it and decided to mod and pamper it. The 2005-2009 Mustangs are hard to beat in the looks department and over the years I have upgraded to a JLT Cold Air Intake with Bama Tune, SLP Powerflo Axleback Exhaust, Roush Hood Scoop, CDC Chin Spoiler, Speedform Side Scoops and Painted Mirror Covers, Staggered GT500 Chrome Wheels, Sequential Tail Light Kit, and Tinted Windows. Once you’ve owned a Mustang, you'll be hooked!"