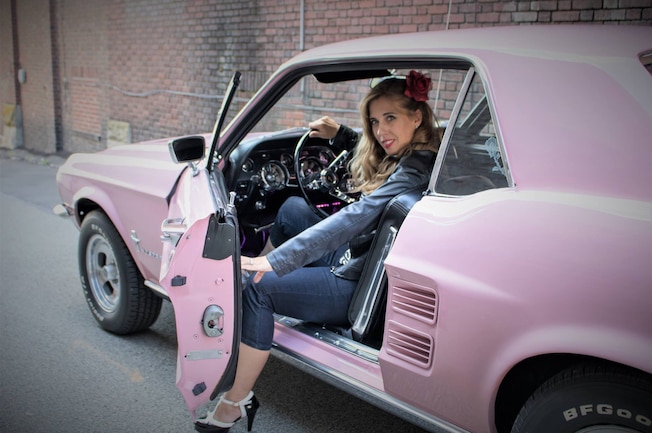 It's Mustang Girl Monday brought to you by Team Mustang Girls. This week we have a special treat for you with Rosey, a rare 1967 S color code Dusk Rose Sport Sprint owned by Teri Garcia.

Teri was raised in a Ford family. She tells us, "At a young age I can remember going to car shows with my parents and seeing all the Ford Mustangs. My first major memory of the Mustang came when I was a sophomore in high school. My Spanish class overlooked the student parking lot and there sat a red 1967 Mustang. I fell in love! I would sit and stare out the window and day dream about having one just like it. A couple years later the same Mustang came up for sale and my parents bought it for me. Twenty two years later I still have it. Little did we know at that time we found ourselves a very rare S color code, Dusk Rose Mustang.”

Over the years the Mustang became part of the family, which has been growing in more way than one. Teri says, "This Mustang is so woven into my life. It's been to prom, was in my wedding, took my kids to their first car shows. She is 1 of 174 produced in Dusk Rose with her options, a 200 Sport Sprint with a 3-speed on the floor. She was restored to her original color in 2002 right before our wedding. In 2007 her motor was rebuilt and engine compartment restored and a large part of the suspension replaced. My husband and I also purchased a 2009 Vapor Shelby GT500 in 2012 and a 2006 Vista Blue Mustang GT in 2015. I love that the Mustang has such an amazing history and how there is such a brotherhood. We are members of the Mason-Dixon Crew. They are our Mustang family and are a huge part of our life. We have all come together because of the Mustang."

Check out Rosey Garcia on Facebook or on Instagram at pinkstang67 for more photos of this gorgeous beauty. Each week Team Mustang Girls features a different female Mustang owner. Submit your story at http://teammustanggirls.com/submit-your-mustang-story/.