Brought to you by Team Mustang Girls: Cheyenne Plummer and her 2016 EcoBoost Mustang 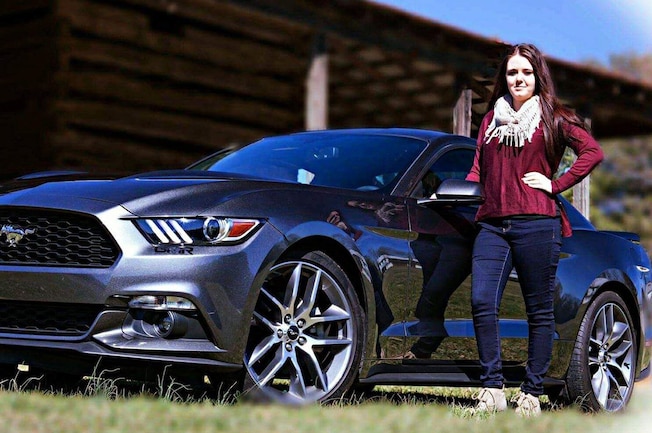 It's Mustang Girl Monday brought to you by Team Mustang Girls, and this week we would like to introduce Cheyenne Plummer and her 2016 Magnetic Metallic Ecoboost.

Cheyenne's love for Mustangs started early. She said, "When I was very young, less than 10, I had a friend who would always give me die-cast Mustangs and I believe that is where my passion began. My grandfather also had a Fox-body when I was growing up."

Her choice for the pony may have been a surprise to some considering her family's love for the bow tie as she explained, "Coming from a Camaro family, I'm the odd one of the family. My fiance and his family also drive Camaros. That makes four Camaros and two Mustangs in my family, so my house is definitely divided. But I have always just had this deep passion for Mustangs and I can't explain it. I bleed Ford blue. My first tattoo was the running pony on my right foot."

Now on her second Mustang the passion has not gone out. "My grandfather and I purchased my first Mustang when I was 15. We worked on it together and added our own personal touches to the car. I registered the car with White Mustang Registry. Now that I have purchased my first brand new Mustang, I have passed along my 1997 to my father. My 2016 is currently registered with Gray Mustang Registry."