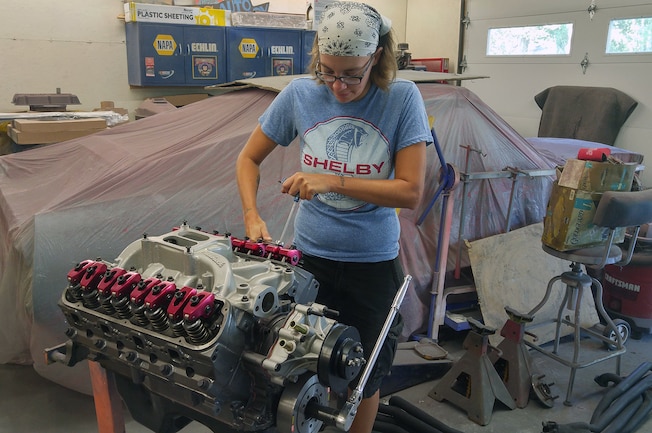 Jessica's passion started at a young age. She tells us, "My first memory of a Mustang goes back to when I was 11 or 12 and my cousin had a 1994 Mustang. She would take me everywhere in that car. My love for them only grew when my dad picked me up from marching band practice. I was a Freshman in high school and he showed up in his friend's 1967 Moss Green Mustang coupe. It was at that moment that I knew I wanted a Mustang."

Jessica quickly turned the desire for a Mustang into reality. "On New Year's Eve of that very same year I purchased my 1992 Fox body convertible (Ruby as I call her) with only 21,000 iles on her little 2.3 liter engine. I learned how to drive in Ruby, got my license, my first flat tire, and also my first wreck (Ruby survived thank God!). I also made sure I had a few of my senior pictures taken with her. I drove the wheels off her; rain, sleet, snow, it didn't matter, I drove her everywhere."

But it's not fun unless you upgrade, right? "Ruby was my daily driver up until two years ago when I decided that it was time to give her a makeover and upgrade to a V8. So I began my research on motors and building them. I bought a random 5.0 off of craigslist for $50 just to start with but I was amazed at how fresh it was when I opened it up. And that was the beginning of my engine building! I now have the engine completely built which I could not have done without my dad guiding me with a few pointers here and there as I was assembling it."

Jessica adds "I have so much planned for Ruby; this is only the beginning. It's been 15 years since I purchased this car and it still blows my mind and makes me anxious all at the same time for what's ahead in this little build of mine!"