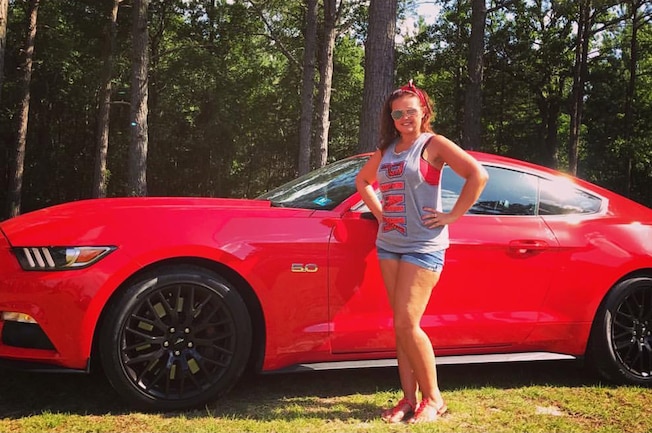 Ladies mark your calendars! This week's Mustang Girl Monday, brought to you by Team Mustang Girls, has a special event planned for the ladies at this years Mustang Week.

Tabatha Block may not have had love at first sight but she's a Mustang Girl now! Tabatha tells us, "My first car love wasn't a Mustang, it was a Mopar. My dad has always been a muscle car fan and was toting me along with him to drag strips and car shows since before I could walk. As I got older I never lost my love for Mopars; I just added my love for a Mustang. I've had numerous cars but my most recent were Lucinda, my blue 2014 GT that I lost in an accident a few months back and her replacement, my new 2017 red GT, Lucille."

When Tabatha heard about Mustang Week she knew she would became a regular attendant. "I've been coming to Mustang Week for four years now. It’s a combination of my two favorite things, beach and Mustangs! Mustang Week has plenty to offer with something for everyone of every age really and if you have a car love like I do, then it’s a perfect retreat. Car clubs of every fashion visit and try to get together while there. They participate in the events and that's sort of where my Girls Night Out idea began. Women play a huge part in the car world and I think sometimes it's good for us to be able to get together, share our stories and love for our cars, and meet other women with similar interests... And not just have to sit back and answer that awful, sometimes infuriating question...is that your husband’s car?"

The Girls Night Out will be held on Friday, September 8th from 6-8pm at Calli Bakers Firehouse Grill located at 910 Lake Arrowhead Road, Myrtle Beach, SC 29572. We welcome and embrace females of every age who share our car passion to come out, see the cars, share their stories and love what we are about. No negativity. No discrimination. Just a mutual car love and respect. Door prizes will be handed but parking is limited so please ladies mark it on your calendar to be in attendance.

Team Mustang Girls will be there covering all the action for you on Facebook Live and Mustang 360! See you there!