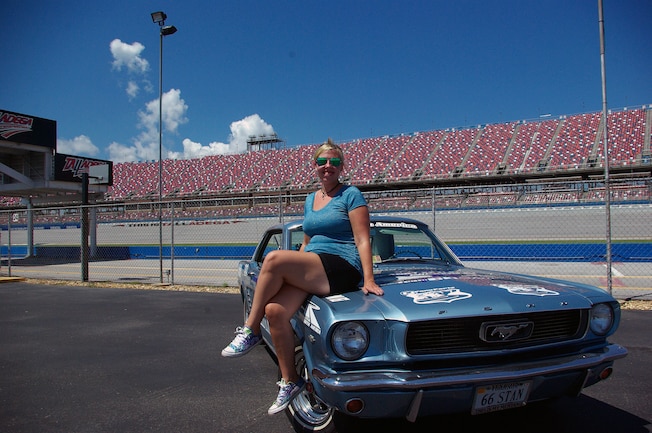 Taylor McBride’s 1966 Mustang is named Stan (MuSTANg, get it?) and it’s silver blue with what she says in the original 289. She told us, “I have been into cars since I was a kid, and I always said that when I get my license I wanted a silver blue Mustang. When I turned 17, my grandfather made that possible. We got it from the original owners, who lived in Lynchburg, VA. They bought it brand new, but when I got Stan he only had 66,000 miles on him, plus the original interior.”

The week after Taylor got her car, she became a member of the Mustang Club of America (MCA) and also joined the Roanoke Valley Mustang Club, and she enjoys all the friends she has made there, and taking Stan to car shows and cruises that the club goes to. Taylor met your author on this year’s Rally North America, when we go to Talladega Speedway in Alabama. She told us, “I am very proud to say that Stan made it 2,500 miles without breaking down or having any problems. The only tough part was traveling with no air conditioning, but it was definitely worth it. We got to make lots of new friends in that one week of traveling, and I also got to meet the famous Mustang Girl Courtney Barber!” Aww, thank you Taylor; it was nice meeting you too!

Taylor went on to say, “It was an adventure worth going on I will definitely be doing it again, but I can now say my car has been on the tracks at Virginia International Raceway, Martinsville Speedway, and now Talladega! I have gotten to do many amazing things over the past four year that I’ve had Stan and I’m excited to see what other amazing adventures that is out there to come for the two of us. I want to thank Courtney Barber for giving me the chance to tell my store of me and my Mustang Stan!”