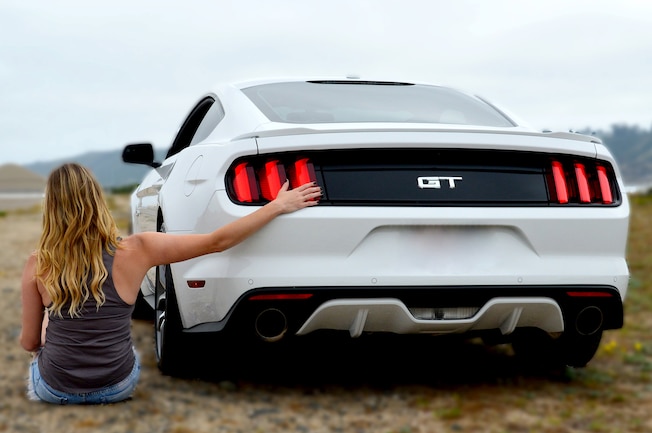 “There are two types of people in this world; the type who only drive a car to get from point A to point B and the type who have gasoline running through their veins.”

Caitlin Strand did such a fine job describing herself and her car for today’s Mustang Girl Monday, presented by Team Mustang Girls, that we’re just going to let her tell her story in her words. Thank you Caitlin!

“I spent most of my childhood in the garage with my dad as he worked on one of the many project vehicles he was working on at any given time. He did a lot of body work for various people around my tiny little town but one of his biggest loves was the Ford Mustang. My father gave me the bug at a young age. When I was 16, I couldn’t afford the Mustang that I longed for, so my dad painted Boss racing stripes on his 1992 F-150. It wasn’t the Mustang I had always wanted, but it was the best gift he could have given me.

“Since then, I always knew I would someday own a new Mustang. So after moving to California, graduating college, and landing a steady job, I bought my new GT. Every time I walk to my car or open the garage door, I smile and get excited to hear the sound of the throaty V-8 (especially with my new cat-back exhaust). I look forward to customizing the car and making it more my own.

“There are two types of people in this world; the type who only drive a car to get from point A to point B and the type who have gasoline running through their veins. The type who love to spend time on the road and enjoy looking their car over after spending two hours detailing it. I feel extremely fortunate to have the means necessary to be one of those people. Life is way too short to drive a boring car.”