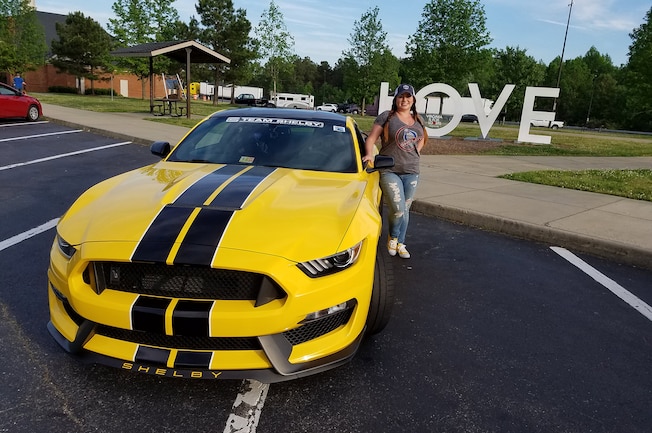 It's Mustang Girl Monday brought to you by Team Mustang Girls. This week we would like you to meet Nickie Armstrong and her 2016 Shelby GT350 and 1978 King Cobra.

Nickie's love for Mustangs runs in the family, "My father is a mechanic and always worked on Fords. Growing up, I witnessed my dad restore his own yellow 1973 Mustang convertible. We would take it to cruise-ins every Friday night. Looking at all the amazing cars, I knew one day I would own one of my own, but I lived in Chicago and Mustangs weren't very practical cars. Fast forward to a few years ago: I moved to Virginia and purchased my first Mustang, a 2005 GT. Since then, I have owned a 2014 convertible and now have my Shelby, my work-in-progress King Cobra, and a wish list a mile long."

And with the Mustangs her family grew. She said, "Mustangs bring people together. You meet amazing people that become an extended family and you get to help your community. I love being involved in charity events that give back to local organizations. As much fun as the track is, there is something about being able to help a local charity out. I work full-time but spend all of my free time with several Mustang groups. I am the Membership Director for Central Virginia Mustang Club, Team Shelby Richmond and Roanoke Director, and also recently founded an all-female car enthusiast group called LAPS—Ladies Association of Performance & Speed—along with a couple other local ladies. LAPS will be a fun way to participate in the car culture while giving back and promoting women in the car culture as well."