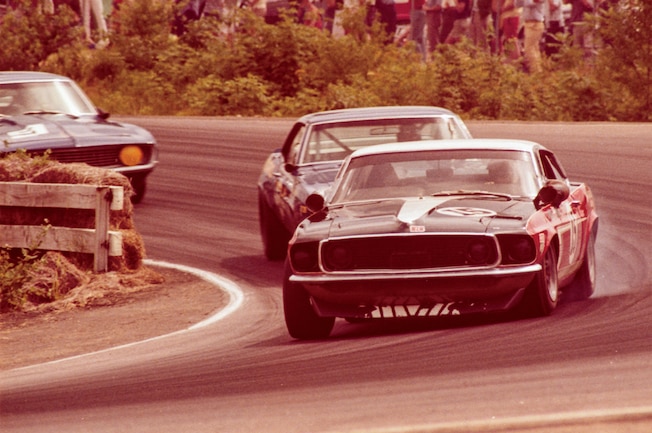 Though we pulled this photo out of the TEN Archives, it was not shot by one of our photographers; it originally came from the Ford Photographic Library, most likely to promote the campaign of the Boss 302 Mustangs built for the hotly contested SCCA Trans Am series in 1969, after a disappointing 1968 season. Number 15 was chassis number 9F02R112074, prepared by Ford subcontractor Kar Kraft and given to the Bud Moore team for Parnelli Jones to drive. More team cars came later (for George Follmer—he was #16) but 074 was the first one in competition, in the Citrus 250 at Daytona in 1969. This photo is obviously not from Daytona, and it doesn’t look like Riverside, but since it’s not our photo, we don’t have information on where or when. But it’s nice to see Parnelli out in front of two Camaros, the rearmost a Penske car we assume driven by Mark Donahue, though we can’t see the Camaro’s number in this shot.