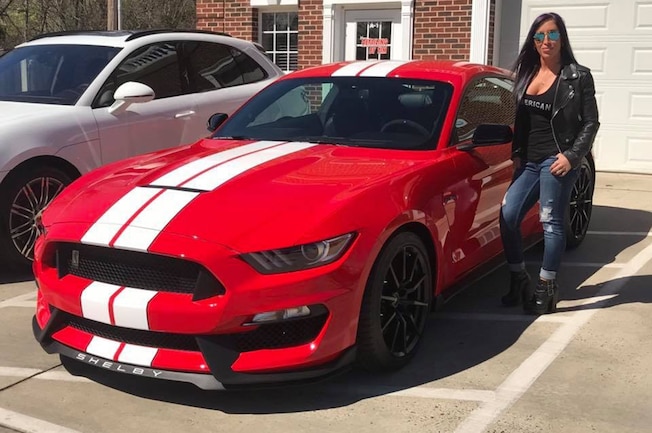 Since her last Mustang Girl Monday article from Muscle Mustang & Fast Fords and Team Mustang Girls in October, 2014, Kristen has been quite busy with her Mustang hobby. Shortly after driving her 2014 Track Package Mustang GT in its stock configuration at the performance driving school put on by the Carolina Regional Mustang Club at South Carolina Motorsports Park, she realized her car could use some tweaks to make a fantastic track car even better. So that winter, Kristen had a JLT cold air intake, Kooks long-tube headers, Kooks catted H-pipe, and Borla Stingers installed on the car. A custom dyno tune put it at 433hp/410tq at the rear wheels, quite an improvement over stock and made it "an absolute blast to drive," as she said. She enjoyed her 2014 again the following track season but the new S550 body style was calling her name.

In November 2015, Kristen was able to secure a true 50th Anniversary Mustang GT (#1375, Kona Blue, 6-speed) and was immediately in love with the independent rear suspension along with the creature comforts not found in the earlier S197 models. As with the last car, she took it to Pro Dyno (www.pro-dyno.net 855-776-3966) in Fort Mill, SC, to have some performance upgrades added. Dan DeSio along with his crew (Paul Conner and Shane Joye) installed a JLT cold air intake, Kooks catted long-tube headers, Kooks H-pipe, Kooks 3-inch exhaust and mufflers, Roush coilovers, and one of her favorite mods, a MGW shifter. Dan was again able to custom tune the car to well over 400hp on the rollers.

Always looking to stand out in a crowd, Kristen's next mod was just that. She enlisted the help of Tim Henderson, owner of Image360 in Gastonia, NC, to fully wrap her car in Fierce Fuschia from 3M's 1080 vinyl series (www.image360.com/gastonianc, 704-824-7446). "It is an amazing process when done correctly," Kristen stated, "Tim and his crew took the molding, bumpers, headliner, etc. off to wrap it how it should be done. The outcome was AMAZING." The reaction from most was positive but there will always be some unhappy with what others do to their cars, a concept that Kristen finds amusing.

In early 2017, an opportunity arose for Kristen to purchase a 2017 GT350 and she jumped at it. The car was Race Red with white stripes and had the convenience package (perfect with two young sons). It was one of the two colors, along with Avalanche Grey, she had been looking for without a dealer mark up, a task that took an ample amount of time. She recently returned from a trip to Ford Performance Racing School in Utah at the Utah Motorsports Campus, where she learned the capabilities of her GT350 from skilled instructors and also got to drive a Boss FRS for an entire day on the track, an experience she is still grinning from. She doesn't see the GT350 going anywhere for quite awhile as it's definitely on her list of "dream cars" and other than a MGW shifter being added in the future, thinks the car is perfect stock. Kristen can be found this summer hanging out at car events around Charlotte with the Carolina Super Stangs (www.carolinasuperstangs) when time allows. She said, "If you see me, stop by and say hi. I'm the ‘kind of’ crazy one with the blue and purple hair—and the bright red GT350." 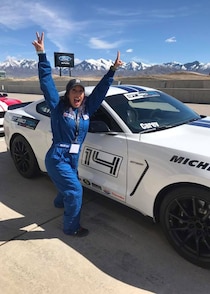 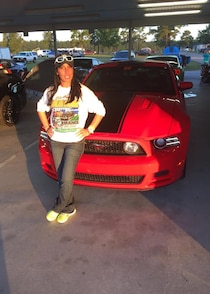