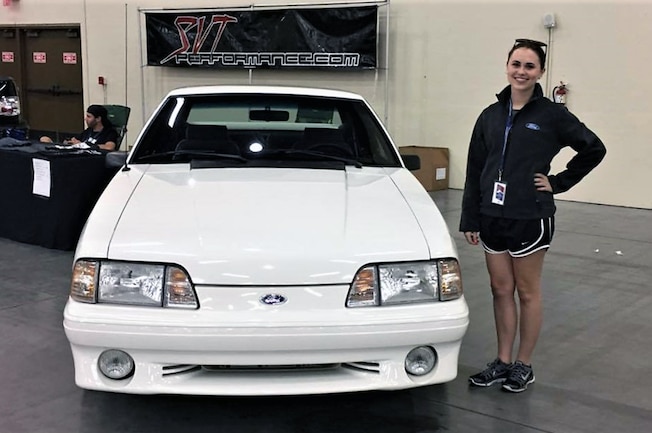 Every now and then, a submission for Mustang Girl Monday is written so well that it seems a shame to change up the wording in the editing process, so we’ll let 20 year-old Danielle Turley tell her Mustang story in her words:

“My name is Danielle Turley and I am 20 years old coming from Rutledge, Tennessee. I grew up as the only daughter in a car family and have been immersed around all sorts of vehicles since I was three weeks old. My mom was a die-hard Chevrolet gal, and my dad loved all sorts of vehicles, but held a certain preference for Ford trucks. I can remember liking Mustangs ever since I was about in middle school. The first time I actually said I liked one was one afternoon in the car when I saw a S197 drive by and completely forgot for a moment how my parents would react. They were in disbelief that I actually liked these kinds of cars and haven’t quite gotten over it since. I loved the green color of the 2005-2009 Mustang and how it resembled an older version of the cars I grew up looking at with my parents at car shows.

That’s the first memory I have of ever saying I actually liked Mustangs and ever since then I have been hooked. I began researching everything I could find about Mustangs and seeing what all there was to learn about these cars that seemed to have a hold on me, and still do. So when it came time for me to start driving I had a good amount of research with Mustangs. I had a 1998 V6 Mustang that I drove in high school and upgraded to a 2007 V6 once I graduated. I sold my 2007 back in December and now have a 2015 GT Mustang that is Ruby Red that I plan on modifying. Four years ago, I also obtained a nice 1993 GT Fox-body Mustang with a little over 1,200 miles on it that is completely stock.

I fell in love with the idea of autocrossing at the Mustang Week show back in July of 2015 and made a pact with myself that I would be bringing my own car. July of 2016 approached and my 2007 V6 was loaded on the trailer ready to head to South Carolina. I participated in the BFGoodrich Autocross Driving School with my stock 2007 V6 and I was immediately hooked on autocross as well. I started out with about 43 seconds on the course on Tuesday and ended up with a time of about 31 or 32 seconds that Thursday with no other factors than hard driving. Steven McCarley of BFGoodrich and Gateway Classic Mustangs gave us some pointers for autocross and what it takes to build a good car, Mustang really, for autocross, and the gears in my head haven’t stopped turning yet. We found a 1967 Mustang with that green color I fell in love with as a little girl and recently bought it to transform into our autocross car.

I currently belong to a club or two, Supreme Stangs being one of them, and look to be joining a few more here soon. I love being around vehicles, especially Mustangs, and sharing my passion for them with those who share it alongside me. It’s been a great ride to hear all of the stories from Mustang people and see their cars along the way. Mustang fever is by far one of the greatest illnesses that I’ve had and I don’t intend on getting cured anytime soon.”