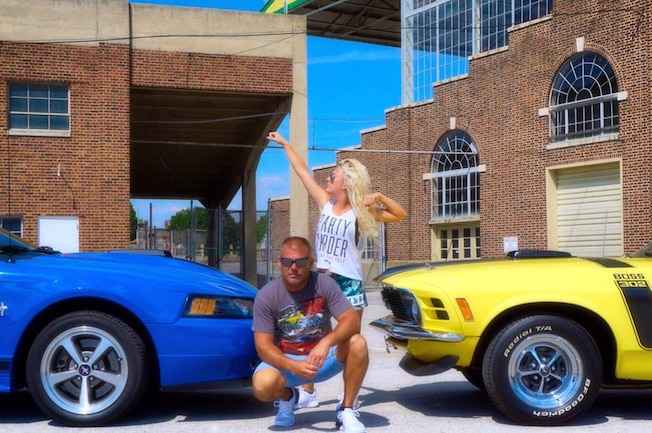 Another week has begun and that means it's Mustang Girl Monday brought to you by Team Mustang Girls. This week we would like to introduce Carlee Shoemaker and her 2003 Azure Blue Mach 1.

Carlee's passion for Mustangs started at a young age. She tells us, "My first Mustang memory goes way back. Ever since I was born my dad owned a bright red shiny 1993 Cobra (which he still has of course). I remember during the summer my dad pushed his Mustang and Harley Davidson out of the garage and sat me right in the front. My parents took pictures of me at age 4 and that just started it. A little bit earlier on I started collecting Hot Wheels, but there was one condition, they had to be Mustangs. I collected them and never took them out of the packages. I said to myself "I'm going to own one of these one day, the real thing." I always wanted to be different and as a girl collecting Hot Wheel cars as a hobby that was as different as you could get."

And the passion continues to grow, Carlee said, "I seriously can't even put into words the love I have for Mustangs. In the winter it feels like a complete and utter drag when all the Mustangs get put away. I count down the months until I can cruise to car shows with the friends that I've met during the past couple years. I've met some of the most amazing people because of Mustangs. Not all of them own Mustangs, but if it wasn't for my car and my dad showing me this hobby I would've never met these people that have made my summers the best summers I've ever had.

My 2003 Mach 1 is not the only Mustang that I have owned. Previously I had a 2003 black GT. I only had the GT because I couldn't find a Azure Blue Mach 1 to save my life. Me and my dad decided to sell the GT after we finally found a Mach. The day it sold was one of the best and worst days ever. First of all who wants to sell their first Mustang? I remember being so mad I didn't even want to meet the people coming to pick up my Mustang and buy it. Are they doing to take care of it like I did? Keep it clean like I did? A boy and his father showed up at my house. They test drove it and right away wanted it. The boy was so happy because he was soon getting his license. Before they left with the black Mustang I asked the boy what his name was and if he had a Instagram and all so that I could still see the car. Fast forward to now, the boy in the story, his name is Cam and he's the brother I never had. We meet up at car shows now with his new 2003 GT. I remember looking back and being so upset the car was leaving but now I'm so happy because I made such a great friend."

Spring is here and that means Carlee's favorite time of the year is right around the corner, "In the summer we get up on the weekends at 6:00 am, load up the Boss 302 and the Mach 1 and head on out with our car friends for the day full of awesome car shows. I'm 20 years old and the highlight of my summer is going to car shows with my parents and my boyfriend. I love cars, I love everything about them. Me and my dad collect Mustangs together and we just had to build another garage to support our habit. There was a Mustang parked in someone's driveway for three years near my house and seeing it rot away was painful for me and my dad. We decided to go ask the guy if he would sell it to us. We now are owners of a 2004 GT. This Mustang deserved a second chance. I may not be a famous Instagram or car model or have a lot of followers but I'd sure like to show people the love I have for these cars and what it really means to me! I pick up your magazine on news stands everywhere and it truly is a dream to be in it someday, or for my dad to be because he's shown me everything I know. Thank you for giving me the chance to share my Mustang story." 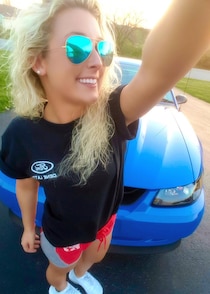 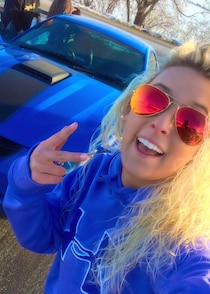 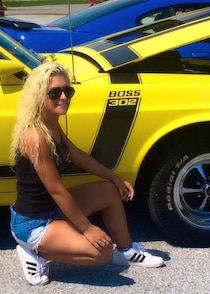 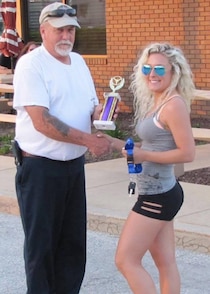