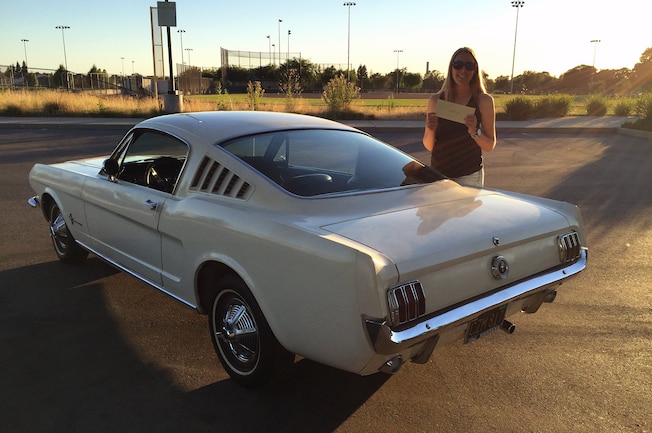 Megan Webb has a passion for Mustangs that came from her father, a mechanic and, as she said, “a wiz at all things cars.” The fact that pops was often found watching the Barrett-Jackson auctions on television and performed a full restoration on a 1968 California Special while she was growing up certainly helped as well.

Megan got her first Mustang when she was a mere 14 years old, a 1966 Vintage Burgandy coupe with a six banger that had been sitting in her grandparents’ neighbor’s yard for as long as she could remember. Megan told us, “The owner had not driven the car in years. We towed the car home and had the thing running later that day. We rebuilt the motor and transmission and replaced the interior before I got my license. My dad taught me how to drive in that car on back country roads.”

Megan’s coupe was her daily driver throughout high school and into junior college, and two of her high school friends also had classic Mustangs (a ’65 and a ’66) and they would always park next to each other at school, then hang out with the cars when school let out for the day. When she transferred to Chico State, Megan left the coupe in Sacramento but would drive it when she came home to visit so it stayed in the family, but upon graduation and the move back to her hometown, she decided it was time for a different Mustang so Megan and her dad went looking and found a ’65 fastback on Craigslist in Belmont, California. It’s a Wimbledon White, 6-cylinder car that is “still rockin’ the 13-inch wheels and has 70,000 miles on it.”

The fastback was built at the San Jose plant in November 1964 so it has spent its entire life in the Bay Area—Megan said, “It’s a California car through and through.” They bought it in December 2015 and sold the coupe sometime after that. Megan said, “My dad and I continue to cruise together and attend multiple events every year with our cars where I take way too many pictures of our ponies. We have gone to Hot August Nights together many times. We have also gone to the Henry Ford Museum in Dearborn, Michigan where the concept and first Mustang produced are housed. We will be attending Fabulous Fords Forever at Knotts Berry Farm with the ’68 next month.”

About herself, Megan said, “Currently I am an Associate Archaeologist at a private environmental consulting firm in the Sacramento area. You’ll find me at the local cars ‘n coffee most Saturday mornings and going for a cruise afterwards. Even though I love the reactions that I get from people when they realize that I have a six cylinder (comments like ‘wow, there is so much room to work in the engine bay’ or ‘I didn’t know that they made fastbacks with a six banger’) the fastback will get a V8 swap here soon.”

Thanks for submitting your Mustang Girl Monday Megan, and we’ll see you at Knotts! Each week Team Mustang Girls features a different female Mustang owner, so if you want to be like Megan and get your story told, submit your story at http://teammustanggirls.com/submit-your-mustang-story/.