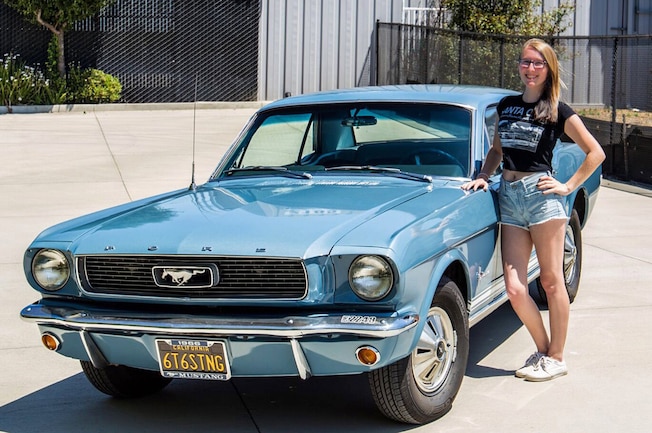 We’ll let Marissa Burckhardt tell her story in her own words:

“My name is Marissa Burckhardt and I am 19 years old. I live in California and own a 1966 silver blue Mustang coupe. This Mustang is my very first car. I have loved classic cars and have gone to car shows and races with my father from a very young age. For some reason I was just stuck on Mustangs from the very beginning, they were always my favorite. My mother owned a white 1965 Mustang coupe as her first car when she was a teen, so maybe that was why!”

That explains Marissa and her car, but how did she end up with this blue beauty? She explained, “In early August of 2015, I had flown to Washington state to visit family. I heard about my Mustang from a freak chance: I had just graduated high school and was looking into buying my first car. My family friend just so happened to be selling it! Never in my wildest dreams did I imagine that the first car I would own would also double as my dream car, but three weeks later I had bought a 1966 Mustang. With the help of my father and grandfather, we towed the car back down to our house in California and we began the long process of deconstructing it in our garage to get it to paint and body repair. The car was completely original so it was sun bleached and had some spots of rust. After we did as much as we could in our garage, we took it to Miracle paint in Pleasanton and I got it back about a month later, painted and rust free.”

“With the help of our friends at Mustang Magic, we slowly restored the exterior and interior of the car back to its original glory. Over the course of about a year I have only added a few extra things: a radio and speakers, a left side view mirror, white racing stripes on the doors, automatic door locks, and recently a new hood scoop. Now I’m planning on upgrading to disc brakes and getting new rims and tires. In the future I wish to rebuild the old inline six that it currently has and try to get more power out of it. I use this car as my daily driver to and from college, so I would love the extra horses!”