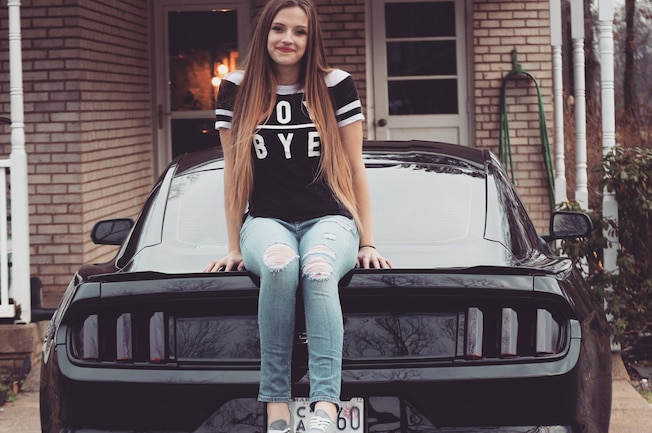 It's Mustang Girl Monday brought to you by Team Mustang Girls. This week we would like to introduce Lindsey Burch and her 2015 Mustang GT Premium.

Lindsey's love affair with the pony began when she made the decision to purchase her car. She tells us, "I bought a Mustang because it's American made! And have you ever seen anyone not smiling while driving a Mustang?" Although we do think anyone that 's spent time on You Tube searching for Mustangs might disagree with her last statement, how about 90% of the time?

Since then Lindsey's passion has only grown, "I have fallen in love with Mustangs and I've gotten to meet some pretty amazing people. I'm proud to be a part of the Mustang family and I am an active member in a local car club called ‘Stang Club Maryland."

What's her favorite part of her 2015? "The grille because you don't really see that on many new Mustangs and I love to stand out and be different. I have done cosmetic upgrades which include: T-REX 3-window polished mesh grille and polished mesh lower grille, Speed Mesh hood vents, Competition Series fuel door, and a Trufiber fiberglass heat extractor hood that's currently being painted. I also have a Roush cold air intake kit and axle-back exhaust system, and a Ford Racing X-pipe. And I am also planning on purchasing some rims soon."