Behind the Scenes of our DRAGG Car Chase Video

The inside story on our Cop ‘Stang vs. the bad guy’s Coyote-powered BMW 3-Series video 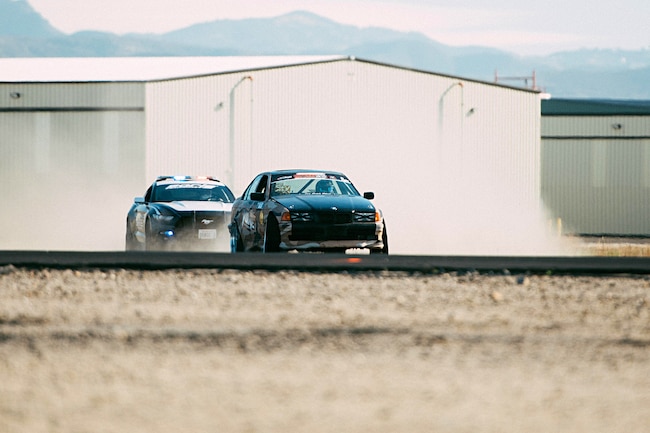 A week or so ago, we posted our in-house-produced video of an S550 Police car chasing a robbery suspect in a BMW, drifting their way through an epic pursuit that eventually ends with the subject cuffed and stuffed up against a private plane. Or was it just the potential criminal’s bad dream? That’s up to you to decide.

Your author ventured up the Camarillo (CA) airport about an hour north of Los Angeles to observe the video shoot and get to know the players, and the photo gallery here is what came out of that, plus the killer photography of 9nine2.

The idea came out of the minds of our former videographer Johnny Wilcox and the guys at Drag Racing Against Gangs & Graffiti (DRAGG), Sergeants Charles Woodruff and Daniel Shrubb. Woodruff and Shrubb formed DRAGG roughly seven years ago, beginning by building a 2006 Mustang (after convincing his commanding officer that it was a good idea) and taking it around to schools to talk to kids about the dangers of gangs and general delinquent behavior, and that morphed into a shop class-style program that the students could get a semester credit for taking.

Woodruff said, “Our main push now is getting kids involved in the automotive industry instead of having them spend time on the streets getting into trouble. We want to push them to look at what’s out there for them, instead of going down the path that we see far too many of them taking.”

Woodruff said gangs, drugs, and violence is a big problem in the Ventura/Camarillo area, a predominantly agricultural area—there are a lot of strawberry and onion fields there—and many of the kids don’t have strong role models to help guide them through their teenage years. Woodruff was a basketball coach a few years ago so he had experience mentoring students, and would love it when a student would come back years later and thank him for the experience. That led him to try and “coach” the same way to the kids in trouble that didn’t know they had any other choices, hence the formation of DRAGG.

He said, “We’ve had a great response to the program. It started with the local schools and is now with the entire (Ventura) county. We give them lots of hands-on experience at different locations—there are six students out here today on this video shoot and we’re trying to incorporated them into the video. That’s the really cool part: not only are they in class learning to change oil and stuff like that, we also take them on tours to Vortech’s place, for instance, to show them why they need the math and computer skills.”

One of those students, Jonathan Gonzales told us, “The DRAGG guys came to the school and gave a speech, and it sounded like something I wanted to do. My counselor signed us up.” Jonathan is currently in the process of building a 1987 Chevy C10 pickup and said he would love to write for a car magazine. We told him to pay attention in English and writing classes and call us when he graduated!

The DRAGG team built this 2015 EcoBoost Mustang, named Thin Blue Line, for the SEMA show, getting the car from Ford and outfitting it with some basic bolt-ons, and that’s when Wilcox saw the car came up with the idea for the video. Woodruff said, “This is a non-profit program and we have no marketing budget, so we worked with Wilcox on this video, and as we got closer, more and more people jumped on board. Like the chopper in the video—he donated his time and helicopter to the video, and he’s a big-time Hollywood and police chopper pilot. He didn’t have to do that.” (Just the fuel bill for this shoot would have been in the thousands of dollars, but it was all gratis once he learned of the program). Likewise, none of this have been possible without the support of the following: DRAGG; Ford Performance, Lucas Oil Products, Vortech Superchargers, 5.11+, Borla, Air Lift Performance, Mustang 360, and Super Street Network.

We can’t forget the drivers behind the wheels of the Mustang and BMW—they are “Officer Dan” Brockett and Matt Coffman, both former Formula D drift drivers. Brockett…sorry, Officer Dan said, “I met the DRAGG guys three years ago at the SEMA show. They had a cop Mustang and asked me if I wanted to drive for them. That was an easy answer—YES! So we did drifting demonstrations out front of the show all week, probably the best SEMA Show I’ve ever had.” Coffman is a friend of Dan’s and came down from his home in Oregon to take part in the shoot. He told us that he’s done a bunch of drifting and pro rally racing, but like 99-percent of racers found out that actually making a living in racing is a nearly impossible, so he’s trying to get into stunt driving now.

So check out the photo gallery for all of the behind-the-scenes of this multi-day video production, and stay tuned for more to come! 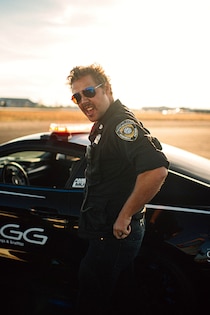 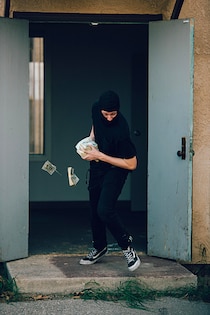 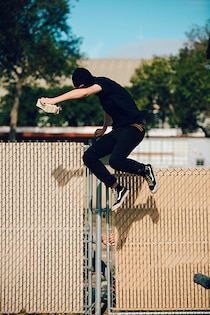 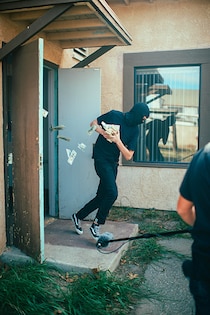 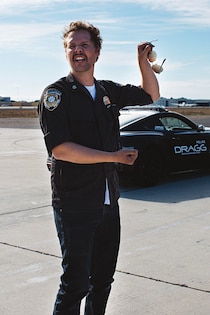 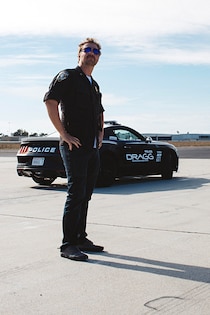 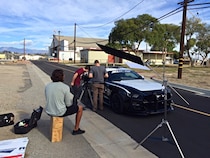 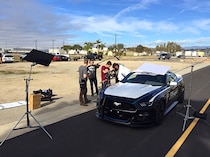 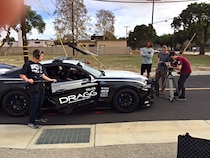 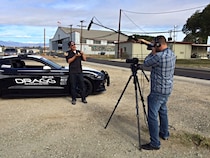 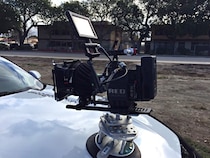 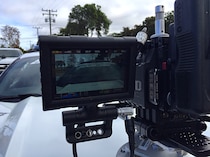 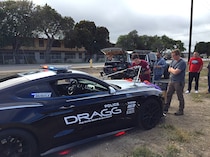 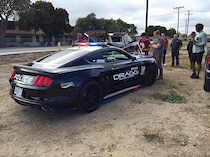 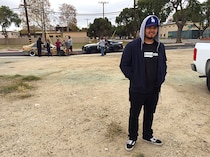