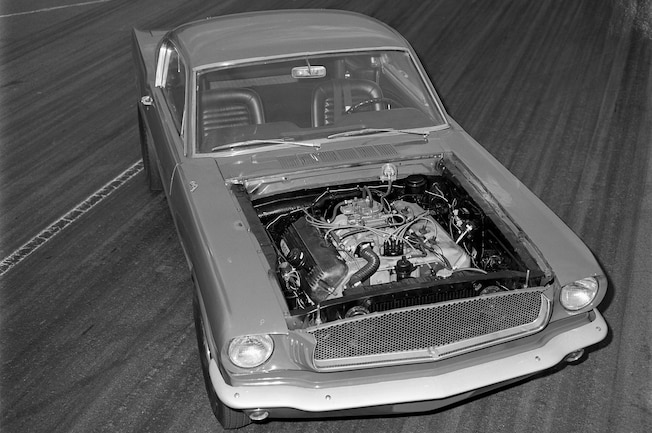 Ever wondered how a 427 SOHC engine fits in a 1965 Mustang? It’s tight! We found this photo in the TEN archives, taken by Darryl Norenberg who turned the film into Petersen Publishing’s photo lab on New Year’s Eve, December 1964. It’s part of a clandestine evening test session at Pomona featuring this ’65 Mustang fastback stuffed full of 427 Cammer. Here, the hood (complete with reverse teardrop scoop) is removed to expose the massive powerplant. The guys in the photo are Little Dick Brannan and Big Charlie Gray, and the car is the #1 A/FX Mustang built by Dearborn Steel Tubing. It had a single four-barrel carb for this Pomona test, but later had dual quads and became the Stark Hickey Goldfinger car.