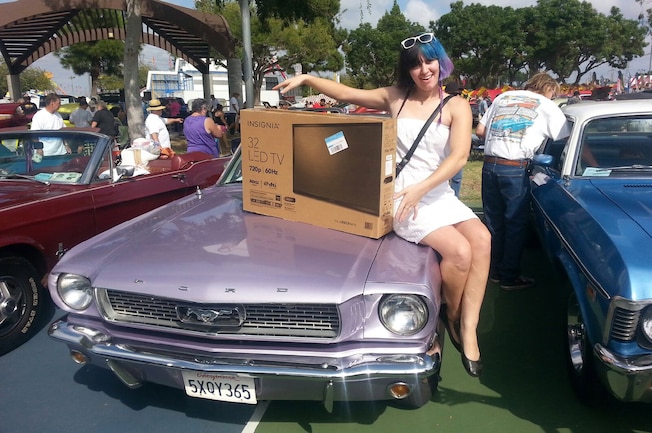 Repo men can be considered “car guys” since they spend their days towing cars and trucks that people can’t pay for, and that time around vehicles often turns into a hobby involving cool cars (building them, not stealing them!). Ruby DeSimone’s father was a repo man while she was growing up, and his profession also became his hobby, restoring, as Ruby said, “cars, planes, and any other form of transportation.” She continued, “I got his love of classic cars and often helped him with whatever project he was working on. For Christmas, when I was 12, I asked for a horse, but he surprised with this Mustang as my first car.” Ruby’s dad had the car painted her favorite color and the father/daughter worked on the rest together.

Sadly, her dad passed away from brain cancer five months after gifting her the car and she has treasured it ever since, saying, “I’ve had her for seven years now and it has been my daily driver for three years. I do all of the work and am thankful for all the things my dad taught me and for passing his love of locomotives down to me.”

The car is a 1966 coupe with the numbers-matching 289, which Ruby just rebuilt this past summer. She converted to dual side exhaust but otherwise kept the rest of the mechanicals original. Most of the changes to the car have been cosmetic. Ruby said, “The car was originally Cherry Red with Parchment and Red interior, but was in pretty bad shape when we got it. The paint is now custom lavender and it has white pony interior. I call it the Purple People Eater—everything from the carpet to the trunk lining to the dash and even the engine are purple.