Mustang Girl Monday: Tayla Burns Gets Emotional About Her 1965 Fastback 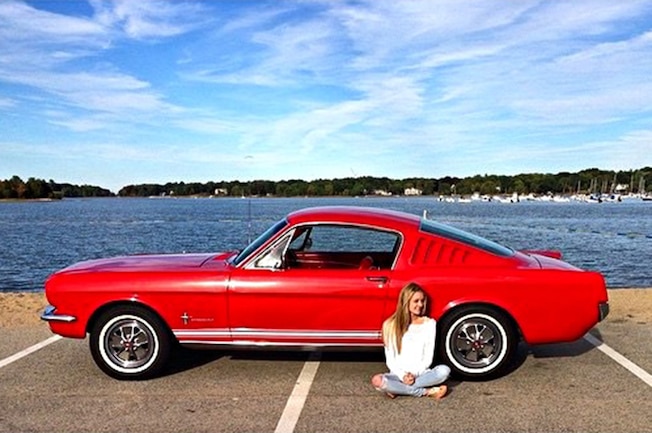 Tayla Burns grew up in a Mustang family—her father used to have a 1969 Super Cobra Jet Mustang and the family has had a variety of late-model Mustangs as well as 1989 and ’92 LX Fox-bodies, and the latest addition; a 2016 GT350. But it was the fastback that she has fallen most in love with.

Tayla told us, “My first memory was that my dad would go to the Mecum and Barrett-Jackson auctions all the time. He was selling his 1973 CJ and I would sit at home with my mom watching the auction on the TV. I would call my dad when the car came on and wave to the TV, thinking he could see me. Remind you, I was very young; I'm smarter than that now!”

An auction would come into play for her one true love as well. Tayla said, “My sophomore year in high school, I was wrapping up with my final tests ready for summer. I didn't have a test on a Friday, and Thursday at dinner I told my parents. My dad knew the Mecum auction was being held that weekend in Kissimmee, Florida (we live in Massachusetts). So he asked that night if I wanted to go and we booked the plane tickets that night, for Friday to leave. On the last day, there were about 40 cars to be auctioned off. I was staring at the chart list of the next cars and one said a 1965 fastback. I have an extreme love for fastbacks so we got up and walked past the cars in line until we saw it. It was Poppy Red, 200 ci, with a four-speed and bright red leather interior with 50,000 miles.

“I fell in love. I would have rather had a 289 but I was still blown away. Remind you that when we got to the auction we weren't technically going to buy anything—but we never said we weren't, either. So we were checking the car out and a few people came over to do the same thing, so we started to bad-talk about it to make people go away, saying things out loud like ‘oh it's only a six!’ We sat back down as it was coming up to the auction block next, I was so nervous. My dad made his bids and we walked away with the car! I was crying with happiness at the end when they shook our hands. Since it was the last day of the auction it had to leave the lot that day, so my dad’s friend let us keep her in his driveway until we could ship her up to Massachusetts. On our way there, the battery was about dead so we needed a jump-start and my dad had to keep revving her for 10 miles to keep it going.”

“I truly love my 1965 Mustang fastback, even with her straight six. Talking about it makes me emotional. My dad is my role model, and I want to get married in that car because of my dad and I’s journey with her.”