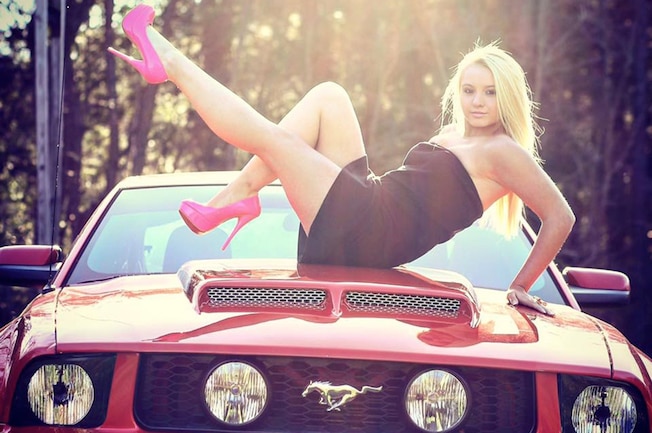 It's Mustang Girl Monday brought to you by Team Mustang Girls. This week we would like to introduce you to Shawnie Bittinger, whose passion for Mustangs started at a young age.

Shawnie said, "Ever since I can remember, I had a special love for cars. Not just any car, but fast cars, specifically Mustangs. My dad and older brother were always involved with fixing cars and I started to love the environment of being around them as well. My first memory with a Mustang would have to be when I was four. My dad had a Mustang. I remember always asking to take that car, no matter how loud or exaggerated it was to an everyday event. It was then I knew I wanted a Mustang as my first car. So, I made it happen!"

The car she got was a 2006 Premium Red Mustang, and Shawnie added a K&N cold air intake, Pypes long-tube headers with a full three-inch exhaust, Ford Racing lowering springs, and some cosmetic changes, but the most significant upgrade is what turned it into the “fast car” she wanted—a ProCharger D1SC centrifugal supercharger. That blower helps the 4.6 three-valve put 341 horsepower to the rear tires.

"I was taught how to drive in a Mustang! The feeling it gave me behind the wheel was empowering,” Shawnie said, continuing, “I knew that whenever I went somewhere, on a good or a bad day, I always wanted to feel empowered. The car you drive isn't just a car; it's a representation of who you are as an individual. My Mustang makes me feel as if I can chase my wildest dreams, and make those come to life."

"Mustangs are not your average car. Sure other sports cars can grab an individual's attention. But not the attention a Mustang could ever show. The Mustang community, especially at car shows, is empowering. It feels as if you are in a completely different world. Everyone is passionate about their car and proud of all the changes to make their car personalized. To me, Mustangs always find a way to win the race and grab the most attention. Mustangs are a way of life in the car world. I hope to always have a Mustang sitting in my driveway, regardless of where life takes me."