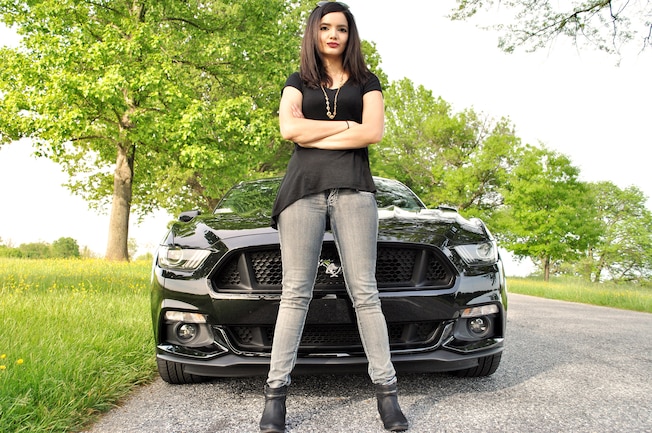 It's Mustang Girl Monday brought to you by Team Mustang Girls, and this week we would like to introduce Naveel O'Neill and her 2015 Mustang GT, which she calls Bullitt.

Naveel has always been a fan of cars, saying, "When I was younger, while my dad was at work, I remember my mom would often leave NASCAR, Knight Rider, or any type of car racing on the TV for me while she cooked. We didn't have cable and there wasn't a whole lot of kid-appropriate content on before school let out, and she knew that it was almost guaranteed that there wouldn't be anything inappropriate to worry about with those shows, and I could watch it without any type of supervision. Little did my mom know that she subconsciously was building the foundation for my obsession with my 2015 Mustang GT, Bullitt."

Growing up in a family that had predominantly owned imports, American muscle cars fascinated Naveel. "I specifically remember summer breaks from school, where I'd be reading a book or magazine or riding my bike outside and I would always be able to tell the throaty gurgle of a Mustang GT engine roaring in the distance. That rumbling sound always made me smile. I knew one day, when I was old enough, that I'd have one. I remember wanting one of those race car beds that were really popular in the late 80s, but my parents always said those were for boys, and I never got one. My mom and dad to this day still remember me telling them that I would one day have a K.I.T.T. of my own. While I don't have a K.I.T.T. now, I do have a Bullitt—named after the movie in which Steve McQueen played the lead character Frank Bullitt. Each day this beautiful, shiny Mustang is my muse, and I feel inspired. There is something so exhilarating about driving around. All the stresses and nuisances of the day just fade away the minute I fire her up, pop the clutch, shift into gear, and take off."

These days, Naveel spends a lot of time taking photos of her car. "Some people think I am obsessed (I will agree with them), but this car has re-awakened my passion for photography. I used to be the "girl with the camera," taking it with me everywhere I went, but as I slipped into adulthood that hobby got put on the back burner, only to resurface while on vacations. The camera now goes everywhere with me. I started an Instagram account out of sheer boredom as a place for me to display my favorite photos, and now keeping up with that has become a part of my daily routine. I enjoy taking pictures of cars because every shot will always turn out different. The way a reflection shows up in the shine of a freshly detailed car can be breathtaking. There's a car show in my town every summer, and I look forward to taking as many photos as possible. Until then, I will continue to adventure with Bullitt and my camera and see where the road takes me."