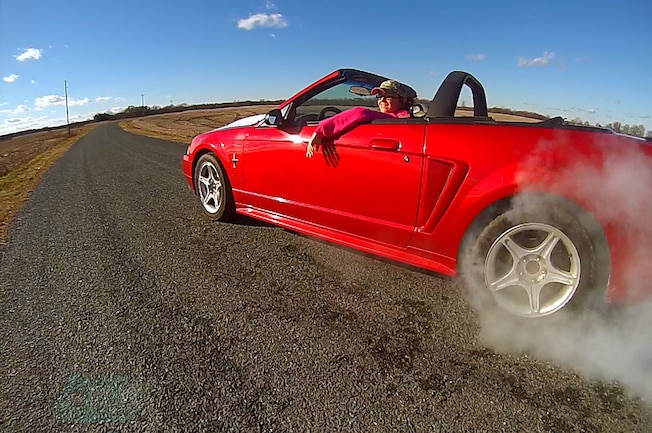 Reesie McGuigan remembers that she always noticed Mustangs more so than any other type of cars. "I have had a fascination with Mustangs from an early age, mainly because I was, and still am, a horse-crazy girl. I remember the first time I laid eyes on a pony car, at just four years of age. It was a black SN95 with a big running pony decal laid out across the rear window. I fell in love. I knew at that moment that some day, I would have one of my own." Her infatuation with Mustangs grew when she attended Mustang Week for the first time in 2011. Being surrounded by so many beautiful cars had her sold, and that's when she decided to make her childhood fantasy of owning a Mustang a reality.

She began the hunt and searched for-sale ads and websites, looking for her perfect car. "I knew next to nothing about cars when I began my search, but I knew two things for sure: it had to have a V8, and it had to be a manual." She never saw herself buying a convertible, but it was love at first drive when she tested out a 2000 GT convertible that looked as good as it sounded.

After buying her New Edge, Reesie started taking it to meets and brought it to Mustang Week in 2012, where she experienced driving it on a track for the first time. As she started attending more events, she also started meeting a lot of fellow car enthusiasts. "Along the way, I learned a lot and became inspired to start doing repairs and upgrades myself. When I first got my mustang, I couldn't identify many parts under the hood. Thanks to knowledgeable friends in the community who got me started, I now have the confidence to tackle most jobs myself."

"When I started on my journey in the Mustang world, my 'Stang was mostly stock, and I can proudly say that I have transformed it into what it is today. I started with simple tasks, like changing the oil and installing appearance upgrades, then as I gained more skills, I learned to change the spark plugs, brake pads, rotors, calipers, shocks and struts, and even did a lot of the sanding and paint prep before completely changing the appearance of my old GT."

Reesie believes that Mustangs are an addiction, and her 'Stang fever is only getting stronger as time goes on. "I am now exploring the thrill of taking it to the track. I love the adrenaline rush of banging gears down the drag strip and whipping it through the cones of an autocross course. For now, it's just for the fun of it but I am turning my attention towards further upgrades to make it a better competitor on the track."