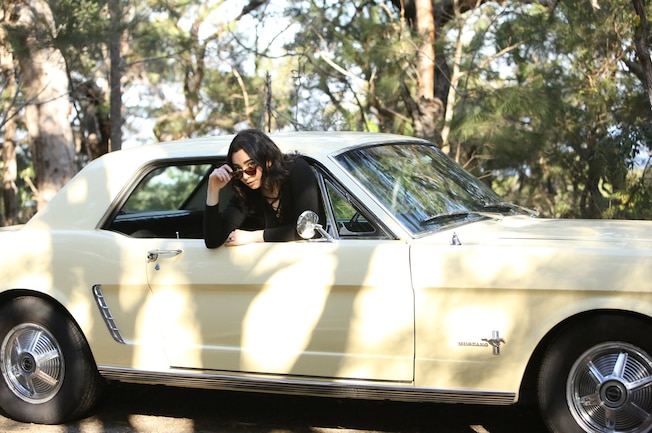 Look closely at the photos that Janette Semerdjian sent us with her 1965 Mustang coupe, then watch the video. You’ll notice the steering wheel is on the wrong (right) side, and she’s driving on the wrong (left) side of the road into on-coming traffic! It turns out Janette is from Australia, where American cars are converted to right-hand drive for that market. Because we love the Australian accent, we’ll imagine Janette speaking in a full-on Nicole Kidman voice while she describes how she found her gorgeous Mustang. She told us, “As an adolescent, one thing I came to enjoy doing was going on long drives, sometimes alone, always at dusk. I'd play loud music, like The Fleetwoods and more contemporarily, Lana Del Rey, hence the name I gave my car—Lana Del Neigh. At the time, I had a second-hand Holden that I had bought to teach myself how to drive a manual. Films like American Graffiti were also quite influential and relatable for me during that time. The whole film held a series of events that unfolded all in one night while cruising the city.

I'd go to vintage stores, fifties fairs, and head to showrooms of classic cars with my boyfriend at the time, who was also into the same classical style and another influence. It was around this moment that I'd decided I wanted a classic car. So, why the Mustang? He had a 1966 coupe, and one of his favorite classic cars was the Mustang. We had a look at other classic cars, but after some to-ing and fro-ing, naturally, he helped me hunt a 1965 coupe down, and I bought it.

The drive back home was a couple of hours long, and I remember declaring that I'd need to swap the drive halfway home. (I'll also admit that that never happened.) It felt like the drive was an hour, at most. It was euphoric and it was then that I completely understood why the gentleman who sold me his car had a tear in his eye when he handed me the key for the last time.”