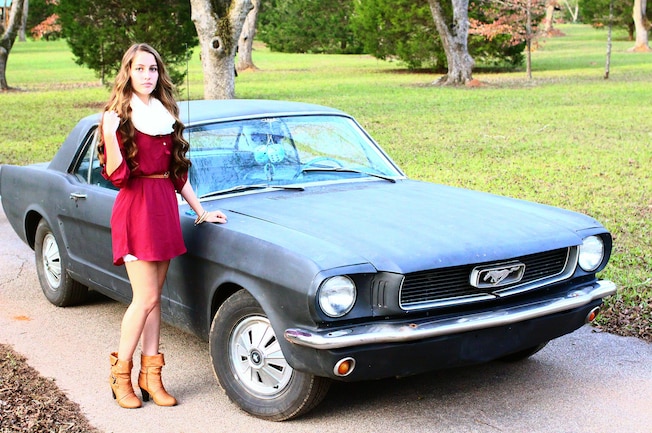 It's Mustang Girl Monday brought to you by Team Mustang Girls This week we would like to introduce Melissa Wyatt and her 1966 Mustang. Melissa fell in love with Mustangs in 2007 when her father purchased a 1966 Fastback. "I saw how much he loved working on it; his passion turned into my passion. It wasn't the nicest Mustang around (it was a shell actually), but to see him put so much time and money into something that looked like a giant piece of metal inspired me to do the same." Ever since then her family has accumulated a variety of Mustangs ranging from classics to a 2006.

In June of 2013 Melissa got her first car and current daily driver, a 1966 coupe she named "Mack". "Mack is named in dedication to my father. I named my car after the trucking company he used to work for because he's helped me do so much to Mack." So far Melissa has swapped from an inline six to a 302, replaced the transmission, installed the interior, upgraded to an aluminum radiator, and sanded and primed him three times. This summer Melissa and her father will paint the car themselves and swap over to five-lug Centerline wheels. Melissa's plans don't stop there. "I'd also like to mod the body with a C/S deck lid and a Thunderbolt hood." We look forward to doing an update when "Mack" is ready for his debut.