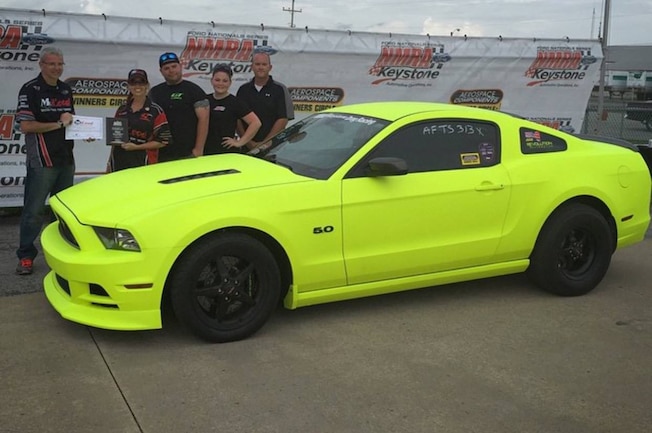 It's Mustang Girl Monday brought to you by Team Mustang Girls. This week we would like to introduce Nikki Frost and her Gotta Have it Green Mustang. As you look at the photos you may wonder where the Green went—Nikki likes to change wraps like an average girl changes her purse!

Nikki's Mustang story begins with the purchase of her first Mustang in June 2012. The GHIG color had just been released and she had to have it! "It's a good thing I did because once it was mine, a lot of doors were opened. The first place I went after the dealership was Capital Raceway in Maryland for a trip down the 1,320. This also started my history of racing with the car." Vortech was intrigued by Nikki's car and in less than a month she was driving her new 5.0 to Vortech in California for R&D and to be the company’s SEMA 2012 booth car. "Thanks to Vortech, I was exposed to a lot of great companies and people in the industry that have helped me immensely along the way."

In 2013 Nikki focused on showing her car at national car shows, which fortunately garnered a lot of awards, a testament to the amazing work and parts from her sponsors. Nikki said, "In 2014 I made the shift to what I'm most passionate about—racing—and what better place to start than with the NMRA? My first sanctioned race was the NMRA All Female Shootout in Norwalk, Ohio, in which I was the runner-up!" It was a dream come true, especially for a rookie. Nikki went on to race a few other NMRA races and her next time in the winner’s circle was in 2015 when she again finished runner up in the All Female Shootout.

In an effort to learn more about the racing fundamentals, Nikki attended Frank Hawley's Drag Racing School in February 2016. "This is the best move by far that I have made as a racer. The team is phenomenal and I now have a better understanding of drag racing and am more comfortable going down the track." This past weekend Nikki was able to apply some of her newfound knowledge at the NMRA opener in Bradenton, FL where she ran in True Street and was the ninth quickest stick shift car out of almost 120, narrowly missing the top 8 for the stick shift shootout. "It was a great weekend for learning and having a blast with some of the best people in the car community. This race season I will be focusing on fine-tuning my racing and trying some new classes, which should be fun!"

Nikki is very grateful for her success, saying, "Without a doubt I would not be where I am today without tremendous help from my husband, friends, and sponsors that include Revolution Automotive, Vortech Superchargers, 13-Three Vinyl Specialists, Magnaflow, Strange Engineering, UPR, Late Model Restoration, Roadwire, McLeod Racing, and TruFiber. Thank you sincerely to everyone for the support and to Courtney Barber and Mustang-360 for this opportunity!"