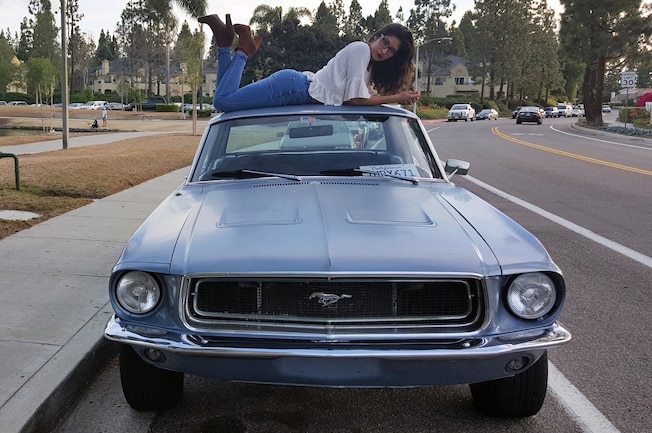 It's Mustang Girl Monday brought to you by Team Mustang Girls. This week we would like to introduce Monica Moreno and her 1968 Mustang coupe.

Monica's passion for Mustangs started at a young age—she can still remember when she was too small to reach the pedals. "I was in love with the classics. My Dad had a 1965 coupe. He didn't have enough money to rebuild it because he was saving to provide for our family, so it eventually was sold but since then I was determined to get one of my own.”

As luck would have it, Monica made her dreams come true at a time she needed it the most. "I had a lot of things going on in my life when I found her, both financially and emotionally, and it was truly a blessing. So it was only right that I named her ‘Karma.'"

After getting her Mustang, Monica has been taking the time and really enjoying learning more about keeping her car running. "In time I plan on having my girl fully restored with plenty of Stallions by her side. She's more than a car, she's the best thing that's ever happened to me. It's her muscle and the sound of her engine that keeps me going when I'm having a rough day."

Each week Team Mustang Girls features a different woman and her Mustang. Check out the past featured ladies from Mustang Girl Monday and submit your own Mustang story at TeamMustangGirls.com.