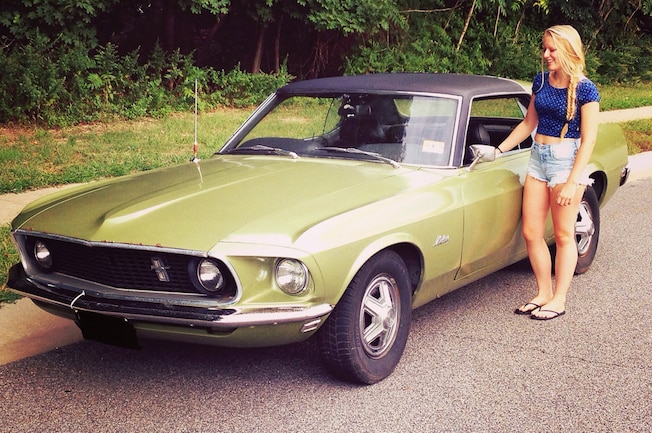 It's Mustang Girl Monday brought to you by Team Mustang Girls. This week we would like to introduce Paige Seaman.

Paige's passion for Mustangs started early on, when she was 10 years old and tagging along while her parents were shopping at a Ford delearship. Paige saw the newest Mustang on display and fell in love with the car and ever since that day, she knew what she wanted—a Mustang!

"I love the classic, iconic look of the Mustang, especially the 1960s models,” Paige told us. “The thrill and rush of driving one is truly why I love them. It's a feeling that I've never had with any other car. The sound of the engine is probably my second favorite thing about Mustangs."

Her first car was a Nissan Maxima, which she said was a decent car but never got her excited. Then she bought her 1969 Mustang. "I love that car more than anything, and it is truly my dream car. I love the classic look and everything about a classic Mustang." Paige recently added a 2006 Mustang to her stable as her daily driver. "It's a great car and I'm so happy to be able to own two of my dream cars." In the future, Paige hopes to buy a 1969 fastback. "I'm definitely a Mustang addict and will continue to add more cars to the collect in time." We guess, Paige Seaman certainly has the Mustang Bug now!