Karli's passion for Mustangs started at a young age 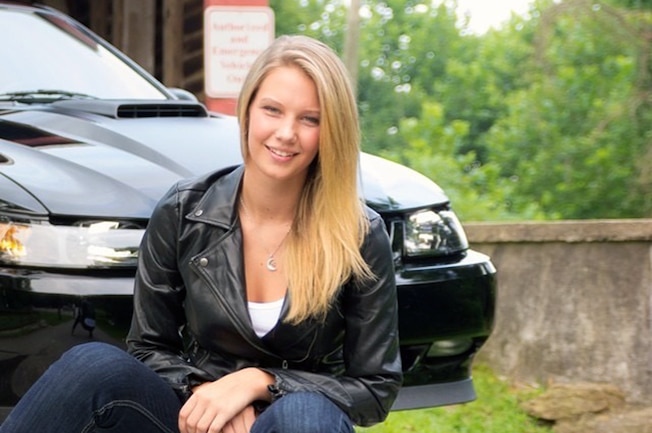 It's Mustang Girl Monday brought to you by Team Mustang Girls, and this week we would like to introduce you to Karli Space.

Karli's passion for Mustangs started at a young age. She said, "I have grown up loving everything there is about Mustangs. My dad owns a body shop, Iron Hill Auto Body, and specializes in restoring Mustangs, so I couldn’t help but be obsessed." When Karli's father was 19, he restored his first car, a 1970 Mach 1 that remains in the family to this day. She still remembers sitting in the driver seat of the Mach 1 and feeling on top of the world as she dreamed of having one of her own someday.

"Since my dad owns his own shop we have never bought a car brand new. We buy our cars totaled and my dad makes them look brand new again," Karli said. Her brother started off driving in a 1999 GT convertible with a Saleen body kit, but then decided he wanted a manual transmission so he got a 2003 GT. When it came time for Karli to drive, she was excited to be passed down the convertible. "Not too many 16 year-olds are handed a V8 Mustang to drive to high school every day. I too eventually wanted something different but I had a different vision in mind. I wanted something more like my dad’s Mach." Karli and her father kept an eye on auction sites for weeks until they found it, a 2003 Mach 1. "I fell in love with it before it was even fixed. Once it was done, you couldn’t get me out of the car for a couple weeks. I was volunteering to drive places just because I wanted to drive it around and show it off."

These days Karli's father does a project car every year. He starts with a vision and usually takes about 6 months to build. He then takes the car to shows and eventually decides to sell it to fund the next one. This past summer Karli got to help him build one. "I got to help pick out the color scheme and the rims and even the stitching that would go on the upholstery. At our house we have about 10 Mustangs, four finished and quite a few that are in the works. Ever since I was little I have been a daddy’s girl, and when your daddy builds beautiful cars that isn’t a bad thing to be."