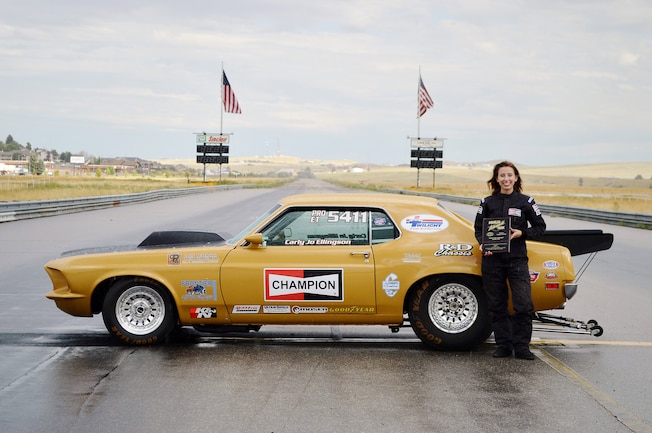 It's Mustang Girl Monday brought to you by Team Mustang Girls. This week we would like to introduce to you racer Carly Jo Ellingson and her 1970 Ford Mustang.

Carly first experienced driving a Mustang when her father took her and her sister out of town to teach them how to drive stick. What he was teaching them in was a 2003 Roush Mustang—what a way to learn how to drive a manual! "My first memories involving Mustangs would have to be just seeing my dad's old daily driver sit in our driveway, waiting to be restored,” Carly said. “I always wanted to see her run, but I never dreamed that I would be racing her on the strip one day! I feel so lucky to have had a father that wanted to put me in a car that not only had a history, but a history in his care." Carly's father has had the 1970 Mustang coupe (that she now drag races) since 1976, when he was a sophomore in high school. Of course they have made a substantial amount of modifications since the days when he drove the car to school, but she's still the old girl that they've always known and loved!

Carly grew up with blue in her veins. "My Dad is a Ford man, so I was genetically wired to be a Ford girl! I love Mustangs specifically because they are beautiful, powerful, and represent American muscle. Everything about these cars begs to go fast, and that's one of the many things that I love about drag racing--the adrenaline rush that I get from racing my Mustang to speeds of about 145 mph in 9.5 seconds is outstanding! I can't imagine life without that feeling."

Carly started drag racing in 2003, in the NHRA Jr. Drag Racing League. Throughout the eight years that she raced junior dragsters, she racked up almost 70 event wins, including three Jr. Dragster Challenges, a South Dakota State Championship, and a national event title as the 2010 Western Conference Finals 15-Year-Old Champion (which earned her with her first "Wally") and six track points championships. As she was aging out of the junior dragsters, Carly and her father decided to build his old street rod into a drag racing monster. "Although we have the car throttle-stopped for the time being, the engine builder estimates that our 523ci big-block Ford should be putting out about 900hp. During my three full years of seat time in the Mustang that came to be known as "Ol' Paint" (for its paint scheme--or lack thereof--that resembled that of an Indian warhorse), I drove my way to nine first place victories!" In 2015 Carly won Champion Spark Plugs' annual "Search for a Champion" sponsorship contest. "I am happy to be continuing my partnership with the Champion family in 2016 as I aim to raise my win-streak and qualify for a few national events." Carly would like to thank all of her sponsors that helped get her to where she is: Champion Spark Plugs, Federal-Mogul Motorparts, Frontier Auto Glass, Counts Car Club, Casey Peterson & Associates, Whipple Racing Products, Wykota Photography, and R&D Chassis.

We look forward to seeing Carly and 'Ol Paint continue their winning streak in 2016. Here is the spec list for her 1970 coupe: 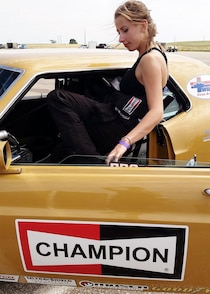 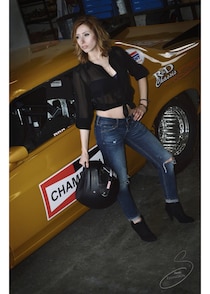