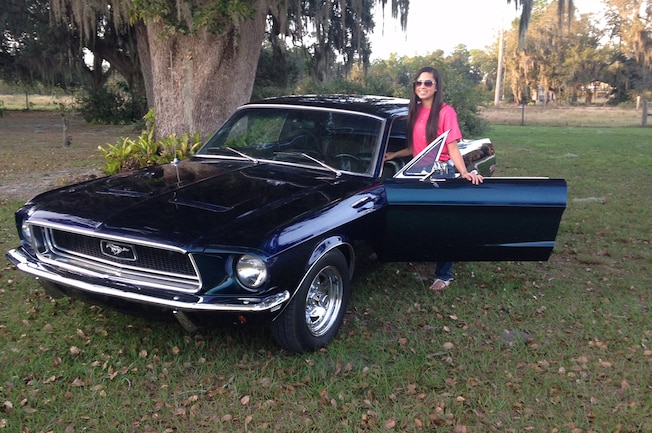 It's Mustang Girl Monday brought to you by Team Mustang Girls . This week we would like to introduce Brianna Waters and her 1968 Mustang.

"Let's just say Mustangs have a long history in my family. I guess I could thank my Papa Jack for that! Although I never got to meet him, I will always know that he is the man who created this obsession within my family." Brianna's grandfather purchased his 1966 Mustang new from the dealer and the car is still in their family today. "My mom says it’s like keeping a piece of Papa Jack alive."

When Brianna was younger, she always wanted a Chevy Camaro, but her mother was always quick to tell her she shouldn't have anything but a Mustang! "Looking back at it now, she definitely knew what she was talking about. Papa Jack apparently told her the same thing when she was my age. She too had a ‘Stang for her first vehicle. Now I wouldn't trade my Mustang for anything, especially a Chevy!"

Brianna's own Mustang story began with her mother one day while they were shopping. "While looking out the window I saw it! A 1968 Ford Mustang! We turned around almost on two wheels and got out to take a look. We both fell in love with the car almost instantly. A couple weeks later I was riding home in my very first car!" Being only 14 at the time, not everyone understood why Brianna already had a car, and with it being a classic, it wasn't in tip top shape—it had a couple of rust spots and a bent fender from a blown tire. But Brianna's father is a mechanic, and "He told me that we would restore it together. He promised me that we would have it ready by my 16th birthday." Brianna and her father have been working on restoring the car. Her father, being such a perfectionist, quickly found that a lot more body work would have to be corrected. After tearing the entire car down to the bare metal, they are almost ready to put it back on the road. Brianna has really enjoyed the whole experience. "Most girls probably couldn't tell the difference between a ratchet and a wrench. I've loved spending time with my dad working on my ‘Stang! Plus with us working on this project together, the great '68 will be completely restored in a couple of weeks! Perfect timing for my 16th! Then it will be time to start fixing up the '66 for my 10 year old brother!"