Blast from the Past: Cartoons Special Mustang Issue 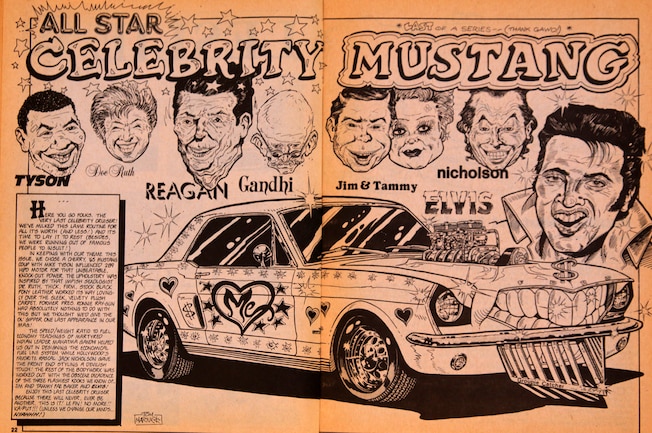 While he was busy moving the TEN photo archives to their new home at the Petersen Automotive Museum a few miles away, archivist Thomas Voehringer found this neat old issue of the incredibly popular Cartoons magazine from February 1989. Stepping into this paper and ink time machine, we realized that Mustang 360 readers might want to check it out, since it’s a special issue dedicate to Mustangs.

Cartoons features the artwork of the infamous George Trosley (most famous for his Krass & Bernie cartoons in Car Craft and several more “adult” drawings in various Flynt Publishing periodicals), among many other artists such as Steve Austin and Shawn Kerri. The issue is full of fun-to-read stuff, but the 2-page spread of the “All Star Celebrity Mustang” is probably our favorite. The ’65 Mustang coupe was designed to kindly “insult” the celebrities of the day (as well as two deceased folks) including Mike Tyson, Dr. Ruth, Ronald Reagan, Ghandi, Jim and Tammy Faye Bakker, Jack Nicholson, and The King Elvis Presley. Check it out, and let us know if you want to see the rest of the issue.