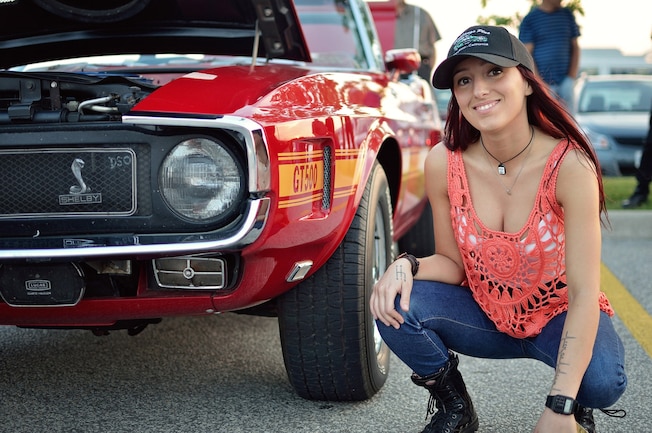 It's Mustang Girl Monday brought to you by Team Mustang Girls. This week we would like to introduce Natasha Marie, aka Mustang Marie.

Growing up, Marie was a tomboy. "It’s 1992 and I head down the hall to see my big brother, Daniel, and my cousin, Stephen, playing with the typical ‘boy’ toys—Ninja Turtles, Transformers, Lego, and action figures lay across the floor. As a young girl you’d think I’d head straight for Barbie dolls, Polly Pocket, and My Little Pony, but I had my eyes set on something else. At least you got the ‘pony’ part right, but I was interested in a different kind of horse; one more associated with speed and horsepower. I gather up my favorite dinky cars and head straight for the Hot Wheels Carpet, where I spend most of my play time humming the sounds of shifting gears. And these are the times when I found myself falling in love with all-things automotive." Marie isn't sure where her automotive passion came from, since she wasn't brought up around a garage or racing, but the draw was undeniable even at a young age. Sometimes she thinks she may have been a car in a previous life.

Marie has always had a preference for classic cars: imports and exotics just didn’t really tickle her fancy. There was something about the history and stories about classic cars that captured her attention, particularly the Ford Mustang. "Not only is the Ford Mustang one of the greatest All-American muscle cars the world has ever seen, but the 50-year legacy this car possesses and the community of car lovers it has single-handedly brought together, is absolutely mind-blowing."

As a child, whenever Marie saw a classic car, she ran to her mother and asked her to take a picture of her beside it (some things never change). As the years went on, she fell in love with cars even more, and began to watch movies that featured classic cars. That’s when she stumbled across a few well-known movies, Bullitt, and Gone In 60 Seconds. "There were something about the relationship these gentlemen had with these Mustangs that immediately clicked for me. The rush of memories of playing with cars, when I was younger, flooded my mind and I just got it. I understood what it meant to love something that much. The Mustang took care of them, just as much as they took care of her. It was this relationship that made me fall head-over-heels in love with this car."

Throughout the years, since her amazing discovery, Marie has learned more and more about the Ford Mustang. She has been to countless car shows, both big and small, but there’s something about a first-generation Mustang that always brings tears of joy to her eyes. It’s been 16 years since her first discovery of the car and since then she has devoted her time and hobby to all-things Mustang. She's read countless books, memorized VIN codes, learned about her history, and has gone to many events. One of her most memorable events happened in 2010 when she attended the Shelby Gala at the Canadian International Autoshow and met the legendary Carroll Shelby.

Marie decided to do everything she could to follow her heart and share her passion and love for the Ford Mustang with the world. That was the beginning of Mustang Marie. "My brand has made its way to countries like the United States, Australia, Germany, England, and Italy. Mustang owners from around the world ask me for “Mustang Marie” stickers so they can place them on their very own first-gen Mustangs. Enthusiasts contact me to talk about Mustangs, tell me how much I inspire them, how extremely impressed they are with the amount of knowledge I obtain about these cars, and constantly encourage me to keep doing what I do. It’s a great feeling to know that people love what I’m contributing to the Ford Mustang community."

Each week Team Mustang Girls features a different woman in the Mustang community. Check out the past featured ladies from Mustang Girl Monday and submit your own Mustang story at TeamMustangGirls.com.