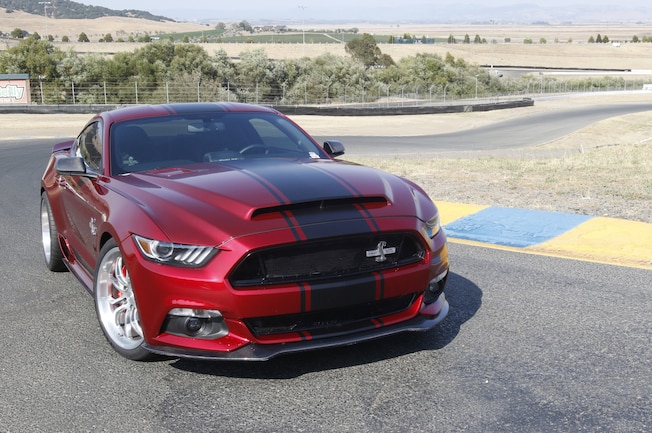 In a world of extreme and excess, the 2015 Shelby Super Snake serves up a recipe performance enthusiasts can devour and Carroll Shelby understood the importance of being extreme. The latest Super Snake thrills with explosive power and race-inspired styling. It is emissions legal and makes no excuses. And with its wickedly insane 750hp engine, familiar center stripe, and 20-inch wheels, the 2015 Super Snake carries on the Shelby tradition in the truest of form.

Shelby American and Ford have been intertwined since Carroll Shelby was tapped in the 1960s to help Ford win at Le Mans. The Shelby mystique grew with the 1965 GT350 and the big-block GT500 Mustangs he produced from 1967 to 1970.

Despite a long lull, a new Shelby Mustang arrived in 2007, when Ford revived the “Shelby GT500” nameplate, which emblazoned the 500hp supercharged S197 Mustang. Seizing the moment, Shelby American of Las Vegas, offered customers a upgraded, post-title GT500 package that transformed a base GT500 into powerhouse with either 605 or 725 hp. Called Super Snakes, these serialized brutes were modified to deliver exhilarating acceleration, improved handling, and a menacing look.

Though Super Snakes are indeed post-title packages (meaning customers first purchase the vehicle from Ford, and then it gets converted), these late-model Shelbys are accepted by enthusiasts worldwide as having that special Shelby touch.

But with Ford no longer producing the GT500, would that kill the Super Snake program? We contacted Shelby American to get the answer. “The 2015 Shelby GT350, with its flat-plane crank 5.2L and high compression, is not set up for supercharging, and this prevents Shelby American from giving it that 750 or 850 horsepower touch,” said Gary Patterson, VP of International and Strategic Sales at Shelby, who jokingly calls himself the Director of Fun. “But once we realized the power and performance we could get from using the 5.0L Coyote, there was no question whether or not we’d continue to produce the Super Snake.

“The 2015 Super Snake is the best all-around Shelby Mustang you can buy,” said Patterson. “When we came up with the 2007 model, we gave it a huge power increase and touches of the 1968 Shelby. But now, the 2015 does it all. Rather than just a straight-line bruiser, this car handles, goes, and stops. We’ve arrived at the most powerful Shelby Mustang we can make at this time. And with 750 horsepower, it’s worthy of the Super Snake name.”

To see what the new-breed Snake was all about, we traveled to Sonoma California, where we lapped the Super Snake during the NorCal Mini Nats 30 at Sonoma Raceway. The question: Could the 2015 Snake live up to the mark set by previous models? We’d soon find out.

Sonoma is home to many events, including NASCAR, on the 12-turn challenging road course. The facility also offers an NHRA national-event dragstrip and we tackled both. We spent two days running laps around the 12-turn circuit (NASCAR and Traditional) and a few hours’ worth of quarter-mile passes.

Like its predecessors, the 2015 Super Snake is unmistakable. It is up in your face with a large-mouth blacked-out grille, a hunkered-down stance, a big wheel and tire package, a lower-slung splitter, and twin nostrils in the carbon fiber hood. Styling is also enhanced with carbon fiber rocker blades, mirror covers, carbon fiber wings, and rear diffuser. The carbon parts can be left with a natural finish or painted to match the body.

Shelby did its homework on the engine—a high-strung intercooled and supercharged 5.0L Coyote that makes an advertised 750 hp, runs on pump gas, and retains emission legality. The 627hp version uses a Ford Performance blower, but our tester was boosted with the optional Whipple (a Kenne Bell is also optional). It sported a performance throttle-body, a cold-air inlet, a Shelby-specific tune, and Borla exhaust. The Snake’s clutch is upgraded and so was the rearend gearing (to 3.73s), and we found the Mustang to have great low-end punch and big top-end power.

What we really fell in love with was the blend of power, handling, and braking. On track, we felt instantly comfortable. Well, as least after following Shelby’s Gary Schechner, VP of Marketing, who showed us the line around the tricky track. Sonoma links 12 technically challenging turns together with massive and abrupt elevation change (14 to 174 feet), and there is no time to relax. Turns 1 and 3 are uphill and as blind as Mr. Magoo, on the back side there’s amazingly fast essess, and then you barrel wide-open into Turn 12, a tight hairpin that leads to the concrete-wall-lined front straight, which isn’t really straight, but launches you uphill into Turn 1 and you do it all over again.

Thankfully, the Shelby made our job easy. The Super Snake was surefooted and had a comfortable balance, even when pressed hard. Where earlier Super Snakes would have stepped out with the touch of the throttle, the 2015 dug in and gripped the track.

“The stock suspension is really good in stock trim,” says Patterson, “but most of our customers want improvement while maintaining the Mustang’s compliance. We track-tested a variety of combinations before arriving at what you drove,” he told us. “It’s a combination of Ford Performance struts, shocks, antiroll bars, and springs. We tightened up the bushings and added adjustable caster/camber plates too. We looked at what could be improved and we went in that direction.”

Shelby also offers a wide list of optional track-friendly features, such as cooling for the transmission and differential, brake ducting, a one-piece driveshaft, a Katzkin interior, a roll bar, and race seats.

The Super Snake rides on Weld Racing 20-inch forged wheels (black or brushed aluminum) and is fitted with Michelin Super Sport tires. (Note: Our Snake wore Pilot Sport Cup 2 tires, 275 front and 305 rear). Stopping power comes from Shelby-spec Wilwood six-piston calipers with 15-inch calipers up front and 14-inch in the rear. And they worked well, providing a nice feel—never once fading over the two days we pounded the Shelby on track. And thanks to the improved engine cooling, the Snake was chillin’ even after running full track sessions.

Unlike previous dragstrip tests, where we benefited from drag radials and a prepped track, we ran this Super Snake as-is during the short period the strip was open for the road racers attending the event. Unfortunately, we battled a 15-mph headwind, marginal track, and the engine was bumping the rev limiter about 200 feet before the traps. Even so, with 1.90 60-foot times, we mustered an 11.93 at 120 mph. We were able to walk the Snake out of the hole, but speed-shifting Second gear resulted in massive tire spin. Each time it would blaze, causing us to pedal the throttle to regain traction. It’s not what we hoped for, but we still ran 11s. We can say with confidence that the Super Snake would be capable of mid-11s with only a prepped track and no headwind. Drag radials would get it in the low 11s. And realistically, 3.55s would keep it off the limiter. A proper drag test might be in order at a later date.

The silver lining was the handling, track performance, and amazing street manners. If you ever watched the Cup guys working around this place, or if you’ve driven Sonoma yourself, you know it’s one of those track where you must strategically place the car, and most certainly feather the throttle more than just hammering it. Navigating the 12 turns requires a constant dance of the pedals, and when you get it right it feels good. Sonoma is a true test for a production car, and the Shelby ate it up.

On the scorecard this motoring scribe scores the Super Snake with a solid “A.” Its handling, stability, and comfort are far and above then previous models, and that gives you a heightened fun factor. It’s got an abundance of power. While the quarter-mile times fell short of our expectations, we don’t think the numbers are truly representative.

The interior is handsome and welcoming, but not overdone. The 2015 Mustang front office is pretty nice stock, and Shelby adds embroidered seats, a trio of gauges (boost, oil and fuel pressure) fixed atop the center stack, and a serialized plate. It also comes with Shelby mats and rocker sills.

“The Super Snake has a ton of content,” said Patterson. “We used much more carbon fiber then before, including the hood, rockers blades, rear wing, and the diffuser—this is no sticker package. We also took out weight in the exhaust by adding a Borla custom cat-back that saved 30 pounds.”

In addition, for the first time ever, the Super Snake is available with an automatic transmission, at all power levels! This could be the ticket for those who want a dragstrip killer without the fear of missed gears or broken half-shafts.

Ultimately, the Shelby Super Snakes gives you that king-of-the-road feeling. It’s what you desire in the car like this, and we weren’t disappointed. It was simply amazing on track, and on the street we wanted to pull up to lesser cars and scream “You’re FIRED!”