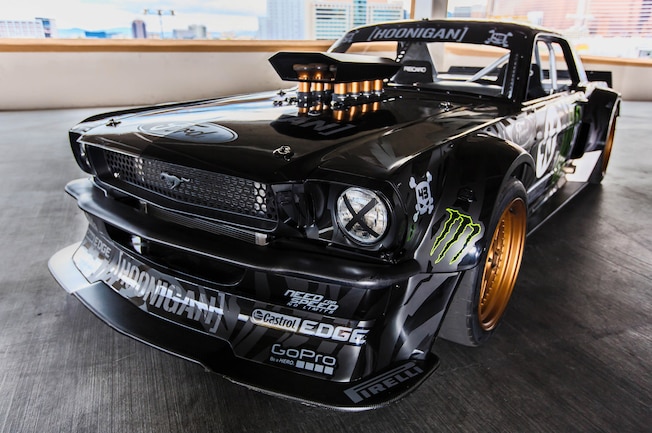 In almost 30 years of Muscle Mustangs & Fast Fords, we’ve seen incredible creations that bust through the boundaries of normalcy. Some have been winners, some, well, not so much. Some have been Ford’s own creations, some privately designed and built. There are many reason to go out of the box, some like to stir the pot, others live to push the boundaries of engineering or appeal.

And not all wild creations have been Mustangs. In fact, did you know that while the 2005 Ford GT prototypes were being developed, the supercharged engine was undergoing testing in a pair of plain, white F-250 pick-up trucks? Well, it’s true. The trucks were used to log miles on the new engine while the GT was still being prepared.

To give you a taste of Ford coolness, we’ve come up with this list of 10 wild Fords (plus one extra) that are unique and interesting. Each one is cool in its own way, from the powerplant, to the racing heritage, to the attention to detail on the build. In addition, there are Fords from a variety of decades, incorporating everything from big cubes and carbureted monsters, to the most modern Mustang with the latest 5.0L Coyote and all the technology 2015 can offer. And, there’s even one Mustang with a combination of old and new—not to mention the unique engine placement.

When it comes to weird and wild Ford vehicles, you may not expect a beat-up F-250 to make the list. But this particular F-series truck is more than your average working man’s machine. Underneath the bonnet is a special surprise, a 550 horsepower 5.4L supercharged surprise. No, this was not a Lightning prototype; instead this freaky Ford was used as a test bed to log miles on the Ford GT V8. According to our source, the 5.4L was fitted to this truck and over 250,000 miles was racked up during initial testing. This included calibration and durability. I’m sure it’s long gone, but we would like to have this truck for track nights.

Spotted at SEMA in 2014, this Fairlane was one of our favorites thanks to a combination of a wonderful engine, a cool theme and amazing detail. Built with a late 1960s NASCAR Stock Car look, this Ford has a “Cammer” 427 with 8 barrel induction, a period interior with wrapped steering wheel, classically laid-out gauge package and the long shifter. The perfectly applied blue and gold paint is the topper, as this car had the detail, the style and the muscle to make the list.

Not only was Watson Racing’s 2015 S550 Mustang one of the first heavily modified “new” Mustangs, it was also one of the finest. The execution is spot on as Watson combined a smart and racy paint job with both racing and street components to drastically enhance appearance and performance on this untested platform. Power came by way of a boosted 5.0L Coyote engine that utilized a Ford Performance supercharger along with a custom tune, American Racing Headers long-tubes and exhaust, enlarged throttle-body and air inlet. The interior featured a roll bar, custom seats, a new center-stack, gauges and steering wheel. Weld RT-S drag wheels and a complete Watson Racing suspension finishes off the package.

As the NASCAR wars of the late 1960s heated up, the factories turned to improved aerodynamics to find speed. Dodge was on track in 1969 with the Daytona, and a year later Plymouth introduced the Superbird. With arrow-like snouts and tall rear wings, those B-bodies cut through the air and pushed Ford to enhance performance of the Talladega and the Cyclone Spoiler, which simply had a flush grille and fastback rear. To combat the mighty Mopars, Ford designed and built these prototypes, the Mercury Cyclone Spolier II and the Ford Torino King Cobra. Unfortunately, NASCAR changed its rules for homologation for 1970 requiring a minimum of 3,000 street-legal vehicles (from 500). At the same time, government regulations on emissions and safety made it harder for manufacturers to build and sell muscle cars and Ford subsequently pulled out of racing. Only a few prototypes of these models were ever built and these two are some of the only survivors.

Ten years before the debut of the Ford GT, Ford designed the Ford GT90, a concept car that was first shown at the Detroit Auto Show in 1995. Powered by a 6.0L quad-turbo 48-valve V-12 making an estimated 720 horsepower, the GT90 boasted a top speed of close to 250 mph. Features included styling cues taken from the original Le Mans-winning Ford GT40 that was melded with fighter jet style cockpit glass and Ford’s latest “Edge” styling. You can see the wheels are not quite up to today’s standard, but the rest of this engineering platform set the proverbial wheels in motion for the production Ford GT.

What do you do when you want classic Mustang styling and mid-engine sports car performance? You build a 1970 Ford Mustang with a Ford GT powerplant. We spotted this sick Stang at the Mustang 50th Anniversary Birthday Bash in Charlotte, North Carolina. The execution is spot on with loads of detail, including carbon fiber in the “new” engine bay, a modified interior with a 1994-1998 dash, custom console and roll cage to boot. It sounded wild and drew quite the crowd. Close the custom hatch and the hood and you’d almost never know this Stang was pushed far from stock. 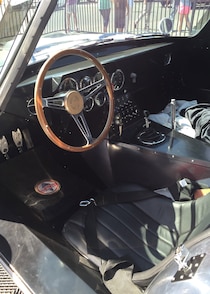 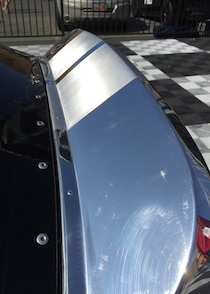 While not one of the original six Shelby Daytona Coupes, this modern Coupe is indeed built by Shelby American with a handcrafted and completely polished aluminum body. This “new” 50th Anniversary model was recently unveiled in Sonoma, California at the NorCal Shelby Mini-Nats 30. According to Shelby, this modern version was built with exacting detail and is authentic all the way through. Peter Brock, designer of the original Daytona Coupe, even gave it a thumbs-up as being as authentic to the original. Underneath, the metal Daytona gets a leaf spring suspension, a beautiful wood steering wheel with 50th Anniversary hub and modern Wilwood brakes. If you opt for the fiberglass body you can add air conditioning, power steering and windows, and even add a coilover suspension. Bob Bondurant and Peter Brock will also autograph each model. The fiberglass car can be ordered with a right-hand drive setup. Shelby is currently offering this aluminum-skinned version in limited quantity (50 examples) for $349,995, or you can have the fiberglass model for $179,995.

For the unaware, the Ford RS200 is a specialized mid-engine all-wheel-drive machine that was produced in Europe from 1984 to 1986 for the street and to compete in Group B Rally competition. This lightweight rocket (roughly 2,300 lbs) used a 1.8L turbocharged engine that pumped out as much as 450 horsepower in race trim and just under 300 for the street-legal models. Meanwhile, upgraded Evolution models made upwards of 600 horsepower using a 2.1L engine, and with a bigger turbo and intercooler could make roughly 900 hp. The RS used a composite body designed by Ghia and a front-mounted transmission. With this setup, engine torque could be applied 100-percent to the rear, 50/50 (front/rear) or with a 63/37-percent (front/rear) split. In any mode, these cars are notoriously tricky to drive. Sadly, on-track performance was sub-par and the RS200 lasted just three model years, however, the RS200 held the record of fastest 0-60 mph time recorded with a time of 3.07 seconds. A record that stood for 12 years!

With a lightweight roadster body, V-8 power and handsome looks, it’s no wonder enthusiast lust after Shelby Cobras. The 289 and 427 rockets are amongst the most popular and replicated, but they are not the most rare Shelby models. With only eight examples produced, the Dragonsnake’s define the words “rare” and “desirable” at the same time. Built with a purpose, the first small-block Dragonsnake’s were prepared to compete in NHRA A/SP, AA/SP, B/SP and C/SP classes and even famed racer Bruce Larson found success behind wheel of one. We spotted this example at a recent Shelby meet in Northern California. The cackle from the open side pipes was amazing, as the rowdy small-block idled with authority. It sported Weber carbs and a four-speed and it’s one car we’d love to make a pass in.

By now you’re all aware of the latest Cobra Jet from Ford Performance. Built to take on the competition in NHRA Stock and Super Stock, the 2014 Cobra Jet uses a modified Coyote 5.0L engine with Boss 302 heads and cams, a Ford Performance supercharger, headers and a caged chassis with a racing suspension. While pricey, at roughly $100,000, the performance is simply amazing and worth every penny. The 2014 Ford Mustang Cobra Jet is capable of 8-second quarter-mile times at over 150 mph as delivered and at times it can produce wild wheelies. Thought not documented, we’d estimate the 2014 Cobra Jet is the quickest and fastest production car you can purchase.

When it comes to all-out and over-the-top, look no further than Ken Block and his Hoonicorn all-wheel-drive Mustang. Both the Hoonicorn and Block, were the stars of the popular YouTube video, Gymkhana 7. Block’s 1965 Mustang creation is totally custom-prepared with all-wheel drive and a fire-breathing 845 horsepower Roush-Yates 410-cube small-block. ASD motorsports, along with Block and Vaughn Gittin Jr. (RTR), assembled the Mustang that utilizes a one-off Sadev all-wheel drive system and massive horsepower to drift, accelerate and smoke all four tires at will. If you’re not sold on this monster Mustang, go to YouTube and watch the video.