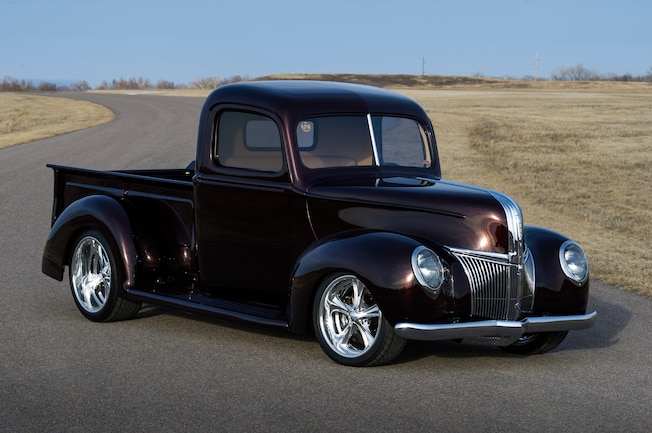 This 1941 Ford pickup was finished in the nick of time to face some serious competition. If it had debuted at a small local show, the truck would have had an easy time overwhelming the rest of the field. Instead, owner Don McCrosky decided to show it off at the 2014 SEMA Show, a gathering spot for thousands of the finest custom vehicles in the country. It was a smart move; not only was McCrosky's '41 ½-ton perfectly in place at the event, but it was seen and appreciated by countless numbers of enthusiasts from every corner of the world.

Not a bad way to make a first impression — especially considering that Don started the project with the intention of building "a fixer-upper in good enough shape that I could do some work on it in my garage and get it on the road to drive around locally with my grandkids."

Don spotted the truck on Craigslist in the Houston area. It had a modified original frame with a Mustang II front clip, moved under the power of a 302 engine, and was advertised as having no rust. "I figured there was a real diamond in the rough here," Don said. Although hoping for a homebuilt project, once he realized his diamond was a little rougher than expected, Don rented a trailer and towed the truck from Houston to Rogers, Arkansas, where Gary Hagar runs the H.A.C.K. Shack shop. "As soon as Gary passed his hand over the front fenders and cab, I knew it was going to take a lot of work to get this truck straight."

Not only was it made straight, it was kept all-steel, including the factory fenders and running boards. The cab was shaved of handles, locks, and trim — except for the hood "waterfall" which was hunted down on eBay (and had been stored in like-new condition for 50 years). Hidden hinges clean up the lines further. The front bumper was rebuilt from two original 1941 pieces. A custom roll pan was fabricated with frenched 1939 Zephyr taillights and a 1941 Texas plate and holes for the exhaust pipes. A tigerwood floor was installed in the Mack's Products steel repro bed. Don replaced the original tailgate with a 1940 version because of the stamped Ford V-8 logo.

Under the hood, the inner fenders and firewall were rebuilt to fit the new engine (a previous builder had recessed the firewall with a plastic wheelbarrow tray). The 302 has been swapped for a brand-new Ford Performance Coyote 5.0 engine topped with a Roush Stage III supercharger system. The massive motor packs the engine compartment; the alternator was reverse mounted for chassis clearance and the de-gas tank was moved to the firewall recess. Kooks headers carry exhaust to custom 3-inch pipes with MagnaFlow mufflers. Transmission is a 4R70W Street Smart Package from Performance Automatic using a Smart Shift electronic controller. A Lokar LED Boot at the base of the shifter indicates gear selection.

Don had decided early that 675 horses pulling on a stock pre-war chassis wasn't a good idea, so he chose to base the build on a Roadster Shop REVO III chassis. The RS IFS package starts with 4x4 boxed 'rails, with Wilwood 2-inch drop spindles and a power rack in front. Sway bars and AFCO Pro Touring coilovers front and rear improve ride and handling. A triangulated four-bar rear locates a new Ford 9-inch with 3.90:1 gears. The Wilwood disc brake system includes six-piston 14-inch rotors in front and 4-piston 11-inch discs in back. The wheels are Coupe five-spokes from Foose Wheels, mounted with Nitto Ultra high Performance tires.

The '41 was painted at H.A.C.K. Shack, using matte finish PPG Tonic Brown on the frame. The rest of the truck was shot with Rugged Amber from PPG's Crystallance glass flake collection.

The interior was designed for a clean look that didn't stray too far from the original look. The cut up dash was restored to original configuration and Gary Hagar provided a design for an under-dash panel to locate the Vintage Air A/C vents. An original 1941 gauge panel (from eBay) was sent to Bob's Speedometer for the addition of a tach and 12-volt electronics. A custom bench seat was built to replace the late-model buckets and Oz Custom Upholstery in Columbus, Kansas, covered the seats, door panels, and headliner with biscuit-colored leather. The A/C and Kicker stereo controllers are located in the glovebox. Other electronics hidden under the seats are accessible via a false trans tunnel

That's how the classic truck that Don originally envisioned as a daily driver ended up, in his words, as a "top-notch resto-mod that should embarrass a lot of performance cars when on the street." After the SEMA Show in 2014, he spent a lot of time showing the truck at hot rod events, where most of the driving was in and out of the trailer. Although the level of the build changed during the project, Don's original purpose for building the truck never did. Now he's ready to use his redone '41 the way he always wanted, "going to pick up my grandkids and just cruising around!"