Newsletter
Sign Up today for our FREE Newsletter and get the latest articles and news delivered right to your inbox.
Home
5.0 Mustang & Super Fords
Features 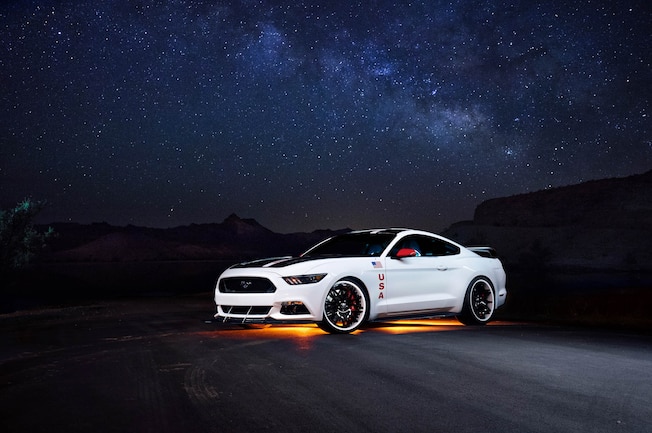 Ford is continuing its tradition of producing aviation-inspired Mustang models for the eighth straight year with the new Apollo Edition. Design and engineering teams took a 2015 Ford Mustang fastback and added unique treatments inside and out to create a model that will excite enthusiasts and collectors as it heads to the auction block.

The Apollo Edition Mustang will be auctioned off on July 23 to benefit Experimental Aircraft Association (EAA) youth programs like the Young Eagles. The auction will take place at the Gathering of Eagles charity event at EAA AirVenture Oshkosh 2015 - the World's Greatest Aviation Celebration.

"Ford has been a committed sponsor of EAA and AirVenture for more than 15 years -- bringing incredible value to those who make Oshkosh the highlight of their aviation year," said Jack Pelton, EAA chairman of the board.

Since 2009, Ford has raised nearly $3 million for EAA youth education programs, with each of the other seven models showing off various design cues from the world of aviation. Last year, Ford auctioned off the 2015 Ford Mustang F-35 Lightning II Edition, based off the GT fastback coupe. It featured styling similar to the Lockheed Martin F-35 Lightning II fighter jet, and raised $200,000 on the auction block. We expect that the Apollo Edition Mustang will earn just as much, if not more, when it sells.