Mustang Concepts You Need to See

Ideas, styling experiments, accessories, and blunders that never made it to market (and some that did!) 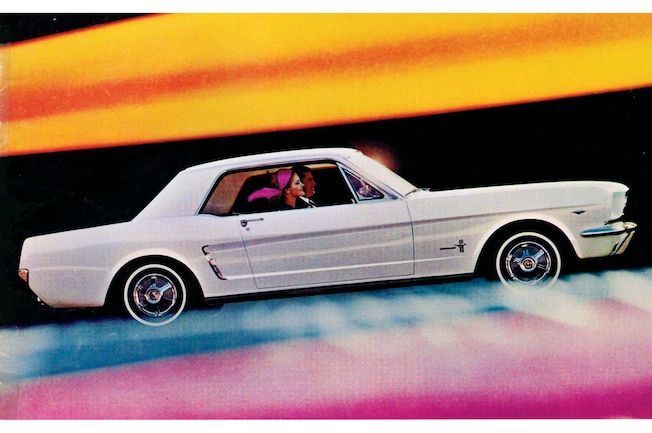 Concept cars and wild-weird marketing experiments are the elements of dreams where automotive stylists, product planners, and dreamers can create to their heart’s content. Sometimes these wild and crazy ideas make it to market, like the coyote ugly Pontiac Aztek and AMC Pacer, and sometimes they wind up on the scrap pile or on some designer’s bookshelf filed under what might have been. And like Pontiac and American Motors, Ford has had its share of successful and embarrassing moments behind the scenes and on the main floor of the world’s auto shows. It has also had those moments where we wish Ford had gone to market with some of these groovy ideas. Mustang began as a marketing experiment rooted in a young sales executive’s gut instincts about the baby boomer market. A youthful and tenacious auto executive named Lee Iacocca came out of Ford’s Philadelphia district sales office into Dearborn, Michigan, with his own growth vision for himself and Ford Motor Company. Iacocca told this writer in a 2004 Mustang Monthly interview that his success had always been connected to baby boomer trends and what this large generation of 70 million people wanted—and so it went.

When Ford President Robert McNamara, one of Henry Ford II’s well-groomed “whiz kids” left the company to join the Kennedy Administration in 1961 and Iacocca became Ford Division General Manager and Vice President, it opened the floodgates for a lot of new and exciting ideas for Ford Division. For McNamara, automobiles were utilitarian transportation and nothing more, hence Ford’s stodgy image and rides like the Falcon and Custom 300 sedans.

Lee Iacocca thrust his dreams and visions into his new job as head of Ford Division, fiercely determined to rid Ford of its vanilla image. He launched the Total Performance campaign mid-year 1963 with a number of exciting introductions, like the Falcon and Galaxie fastbacks, the FE series 427 and 289 High-Performance V-8s, Falcon Sprint, and an aggressive entry back into motorsports around the world. With all this public image hoopla came a string of exciting concept cars and ideas designed to give Ford a hairy-chested image.

According to Donald Farr’s excellent book Mustang—50 Years there was a collective effort known as the Fairlane Committee consisting of Hal Sperlich, Frank Zimmerman, Walter Murphy, Sid Olson, Robert Eggert, Chase Morsey, Jacque Passino, and John Bowers. These gentlemen met for several months off-site in secret to come up with a youth market car. It had to be affordable, practical, and exciting—lots of pie in the sky ideas, including a battery of two-seaters. However, Iacocca wanted volume—100,000 units. Two-seaters were never going to achieve those numbers.

Ultimately, Iacocca became anxious and frustrated, choosing to move this effort off dead center. He held a design competition among the three Ford Motor Company in-house studios—Ford, Lincoln-Mercury, and Advanced Design in July of 1962. The Ford Studio design team of Joe Oros, Dave Ash, Gale Halderman, and Charles Phaneuf came up with the winning “Cougar” clay that eventually became Mustang.

Before you are a number of ideas born of Ford Design and product planners with a lot of imagination. Some made it. Some did not. Some were good ideas while others were terrible. Here are a few of them.

As Mustang enthusiasts, we’re always enthralled with intriguing ideas and concepts that never made production, but fuel the imagination. Unfortunately, a good many of these ideas are canned by financial and management types who perceive they’re something no one wants. In the end, it boils down to the decision makers with very little of it rooted in what car enthusiasts want. And in the end, it has to be something that automakers believe will sell, which often brings down the curtain on what excites our senses. And yet just imagine: what if Henry Ford II had said no to Mustang—which was in itself a styling and marketing experiment?

This is the 1966 Mustang Skyliner 2+2 retractable that didn’t happen. Former Ford stylist Ben Smith conceived this idea for a Mustang retractable with a manual roof that folded into the trunk. Seemed like a great idea for those who wanted the benefits of a convertible and a hardtop in one. He presented the idea to Lee Iacocca who didn’t care for the idea. Ben went on vacation after Iacocca viewed this concept. When he returned, the car was gone without a trace. Later on in the ’90s, Smith conceived a classic Mustang retractable kit, which is available from Mustangs Plus in Stockton, California.