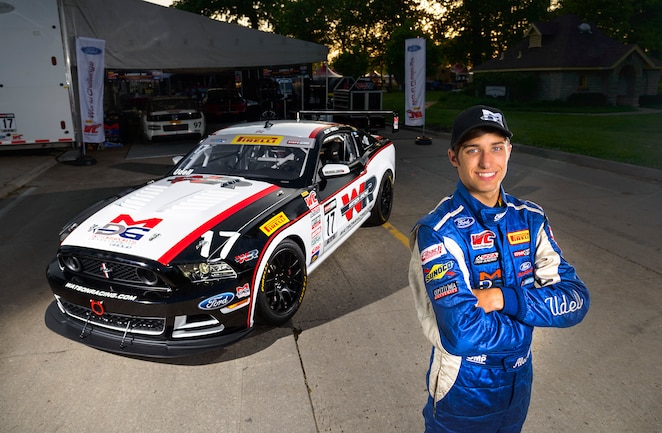 If you’ve been around the racetrack and aren’t familiar with Alec Udell, we think that will change soon. In his short career, the eighteen-year-old has racked up an impressive racing resume that includes several professional racing podium appearances, a pole position, and the 2013 NASA American Iron National Championship.

MM&FF: It’s great that you took time out of your busy schedule to talk with us. How did you get started in racing?

Udell: My father and grandfather were involved in amateur sports car racing, and when I was five years old, they got me a kart. We’d practice in parking lots and did some racing. Over the next few years I moved up to bigger and faster karts and won the 2008 Rotax Minimax National Points Championship.

MM&FF: Looks like early on, your family recognized you had some talent. The common step from karts is to entry-level open-wheel racing, but instead, you went sports car racing. Why?

Udell: As a teenager with eleven years of kart racing experience, my family concluded that there weren’t many opportunities to race open-wheel cars. So we bought a Spec Miata and went club racing, where I honed my talents driving a [full-size] car. We wanted try professional sports car racing with Grand-Am, but I needed to wait until I was sixteen to race. So, we put a deal together to race a Camaro with Momentum Autosports in World Challenge for eight races in 2011.

MM&FF: So your first season in professional racing was behind the wheel of a Camaro. You were the youngest driver to ever compete in Pirelli World Challenge, and you got pole position at Mid-Ohio. Now you race a Mustang. Why?

Udell: Because it was the first year of the Camaro in World Challenge, we struggled with the car a bit. We had some brake issues on the Camaro during the season finale at Road Atlanta, where I tried Capaldi Racing’s Mustang. During the 2011 season, the Mustang was the car to have for the GTS class. That, and based upon my impressions driving the car, I switched to a Mustang BOSS 302R team for 2012. We paired up with Watson Racing Halfway through the 2013 season and have had a real great chemistry between our families since. It has been a great mutual partnership between myself, Motorsports Development Group (MDG) and Watson Racing. Watson's, being the builders of all the Mustang Boss 302S' and 302R's know the cars inside and out, and have all the resources to build a great car. Stuart Robinson and Ed Gilfus have teamed up through MDG to provide amazing trackside support and engineering on setups for our Mustang to keep us in the top five at each event.

Udell: It depends upon the track. The Mustang BOSS 302R is a very “point and shoot” car. It has a high top speed. With a 7800-8000 RPM redline, it makes a lot of horsepower over a wide RPM range. With such a flexible power band, I don’t have to shift gears as many times each lap as the other cars. With our Cortex Racing “Watt’s link” suspension, my Mustang can catch some of the slower cars trough high-speed corners. But, the Mustang BOSS 302R suffers in tight turns and under braking.

MM&FF: The front-wheel drive Kia Optimas are surprisingly fast in the GTS class.

MM&FF: Back to you and your career. What are your future racing plans?

Udell: My professional racing goal is to finish in the top three in the 2014 Pirelli World Championship standings. Last year, I finished two points out of 5th place, so I know I can do it. Then, maybe move to professional endurance racing [IMSA TUDOR United SportsCar Championship], and maybe some oval track racing. In racing, I think it’s important to specialize, but I also want to broaden my racing experience.

MM&FF: When you’re not racing, what else keeps you busy?

I’m also interested in the business side of motorsports, but I figure it’s better to study engineering now, and get an MBA [Master’s of Business Administration] later rather than the other way around.

MM&FF: Sounds like you’re trying to get all your bases covered so you can maintain a career in motorsports in some form or another.

Udell: Exactly. I want to make a living in racing. Even professional sports car drivers can work into their 50’s or 60’s, which is longer than professional athletes in football or basketball. If you do something you love, it isn’t work. I want to make motorsports not only my work, but my life.