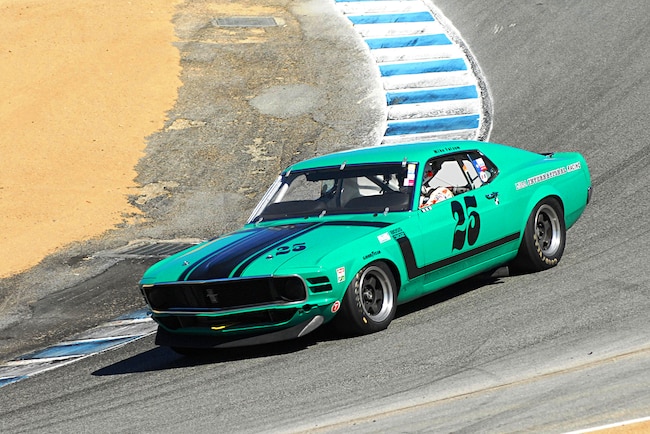 Ah, there's nothing like a good mystery to get the investigative juices flowing.

Craig Conley, owner of Paradise Wheels in San Marcos, California, campaigns this Grabber Green 1970 Boss 302 Mustang in Historic Trans-Am vintage racing classes as well as at Shelby American Automobile Club open-track events. To our knowledge, it is the only Grabber Green 1970 Boss 302 Trans-Am Mustang built by Ford Motor Company and Kar Kraft Inc. with the express purpose of racing in the SCCA's Trans-Am series or potentially even NASCAR's Baby Grand American racing series. We believe Conley is the ninth owner of this Boss 302, but we can't say with certainty because the car's earliest history is somewhat cloudy.

On September 22, 1969, Ford Motor Company Vice President of Personnel and Organization Edwin D. O'Leary had this Grabber Green Boss 302 pulled off the Dearborn, Michigan, assembly line and sent to Ford's Central Office Building Garage (better known as the X-Garage) to be converted into an A/Sedan race car. Ford's highly successful Trans-Am Mustang program, championed by the Bud Moore Engineering organization, was at the pinnacle of success in 1970, ultimately wrestling away the Trans-Am championship that year from Team Penske and Chevrolet. It seemed that everybody at Ford's Big Glass House had Trans-Am fever, so it's a reasonable assumption that this car was an interdepartmental project or, at best, a backup car for one of Ford's sponsored Trans-Am racing teams.

Ownership records indicate a sizeable gap between September 22, 1969, and the acquisition of the Boss in early 1971 by Libra International Racing CEO John Buffum. Buffum was more than happy to share with us what he knew about the car.

The rally star intended to enter the Mustang as a team car with his championship-winning English Ford Escort, with University of Vermont engineering graduate/weekend racer Mike Folsom driving. Buffum does not remember whom he acquired the Boss from, other than the party was from Michigan or Minnesota. (However, he does remember that he traded away his 1968 Monte Carlo Porsche 911. Later he regretted the trade because that car in today's exotic collector car marketplace would be worth a king's ransom.)

"The car was half completed," says Buffum. "As with many unfinished race car projects, parts tend to walk. For instance, one of the rear disc brakes was missing. Various brackets and other items that you would normally find on a car like this weren't there, either. The engine wasn't supplied, maybe not even the transmission, but I can't clearly recall. The bodywork was only half completed. It was definitely a work in progress. Mike finished it up as best as he could with the money he had."

In 1971 and 1972, Folsom raced the Mustang with little success. It would DNS at the Lime Rock, Connecticut, event and DNF in Bryar, New Hampshire. It logged two 20th Place finishes at the 1972 Watkins Glen and Sanair, Canada, Trans-Am races. There may be more racing history floating around the cosmos, but we sure weren't able to find it.

At this juncture, we started contacting everyone we knew who was in the trenches back in the day and is still on the right side of the dirt in hopes that one of them might remember the car. That included former Ford Engineer Jack Roush, veteran Penske T/A scorekeeper and Trans-Am historian Judy Stropus, race car driver Chad Raynal, Kevin Marti from the Marti Report, former car owner "Bahama Jim" Walters, and Joe Cali and Josh Ashby from the International Motor Racing Research Center. Other than what we already knew, researching the early history of the car turned out to be a cold-case investigation.

Jim Walters purchased the car in early 1973. He says, "I had just wrecked two C/Production Sunbeam Tigers—I was not what you would call a highly competitive driver—and needed a car. Friends told me that they had seen this Grabber Green Boss 302 race in Canada and suggested I talk to John Buffum about buying it.

"I was told that the car came from Ford after it disbanded the Trans-Am team. I was also told that Ford and Kar Kraft had built in excess of 20 cars, and they were in different stages of completion. This one was one of the last cars built, so it needed a lot of work."

Walters ran the Mustang at Nelson Ledges on October, 12, 1974, and it was also exhibited at an SCCA display at the New York State Fairgrounds in Syracuse and won the Track Car class.

Between 1976 and 1989, Scott Beshore raced the Boss in Pennsylvania hillclimb events. Although there were many airborne incidents like this, the touchdowns were always without incident. This photo taken by Chris Liebenberg clearly illustrates the pristine condition of the Boss despite its being left outside in the eastern weather when purchased from former owner Richard Dean in January 1997.

Late that year the Boss would again change hands. "At the time I was married with one daughter and another one on the way," says Walters. "I was also building a new house. I was contacted by John Cleveland saying he wanted to buy the car. When John told me what he would be willing to pay, I told him to come pick it up!"

Cleveland's racing partner, Mike Knittel, continues our story: "John and I made a number of running changes and improvements to the car. We ran the car with a Bud Moore mini-plenum intake and installed a set of roller-rocker arms that carried a Ford DOZX part number. We also discovered that both Folsom and Walters had run the car with the rear calipers mounted backwards [Walters confirmed this.—Ed.], and had complained about poor braking. The correction made a huge difference. We also repainted the car blue, installed an SCCA-legal spoiler, and painted the number 15 on the sides of the car."

"I recall we finished Seventh in class at the Glen," Knittel says. "Then we ran the Fun One event at the Glen in October, which was an SCCA Finger Lakes Regional event. We won First in class and set a new lap time for class."

Knittel told an interesting story from the race at Pocono. "John reported that on the back straight the tach was climbing, but the car was obviously not going any faster. We then realized that at about 168 miles per hour the rear wheels were off the track! It appeared as though the rear deck spoiler was set too low, and an angle adjustment apparently cured the problem."

In 1976 the Boss was sold to Pennsylvania racer and used-car dealer Scott Beshore, who raced the Mustang in numerous hillclimb events throughout southeastern Pennsylvania. According to Conley, Beshore was the last person to race the Boss. We are happy to relate that, although the Boss got airborne with alarming frequency, the car always touched down perfectly and was never wrecked.

Next up were collectors Brent Hacker and Richard Dean, who jointly owned the Boss from May 1989 until August 1991. Restorer Chris Liebenberg initially remembers seeing the Boss safely snuggled away in a container and tried to buy the car twice. "It blew me away what a quality piece the car was," he says.

Richard Dean eventually bought out his partner in August 1991, and Liebenberg remembers the Boss being left out in the elements.

With a foot of snow sitting on its roof, Liebenberg finally was able to purchase the car on January 23, 1997, and began a 10-month restoration. Along the way he made note of a few of the car's eccentricities. While it's true that the Boss may have been cobuilt by Ford's X-Garage and Kar Kraft, he's not 100 percent sure that other hands weren't involved in the project.

Liebenberg says, "The rollcage looks like a Kar Kraft Trans-Am rollcage, but it's a little beefier than other KK cages I've seen. The top hoop is shaped a little differently. This particular cage was also TIG welded. The quality of welds far exceeds that of other KK Mustangs I've seen. It's as if it was welded together by somebody who was used to building dragster and Funny Car chassis for a living."

Liebenberg described the Boss as "a bit crusty from sitting outside in the weather, but otherwise the car was in absolutely mint condition."

While sanding down the paint, he came upon the original Grabber Green basecoat. As it's such a rare color, he decided to repaint the Boss in its "born with" hue. Prior to paint, Liebenberg also elected to reskin the fenders, restoring the look of the car back to nearly stock, albeit with some minor fenderwell clearancing to accommodate those massive Goodyears.

Along came Craig Conley, who says, "When Chris [Liebenberg] told me about the car being the only Grabber Green Trans-Am Mustang ever built, I had to have it. Green is my favorite color. All my favorite cars are green: my '67 Shelby G.T. 500 twin-Paxton car, my CSX 4000 Series twin-Paxton Cobra, and my 1966 MK1-A Tiger, all green!"

Conley bought the Boss on November 9, 2009, and has been having the time of his life vintage racing it since.

Should any of our readers have other information about this Boss that could help fill out its murky history, please let us know.

The on/off switch is located on the passenger-side sail panel. Twin aluminum straps keep the rear window glass from popping out due to air pressure buildup during 140-plus-mph top-end charges.