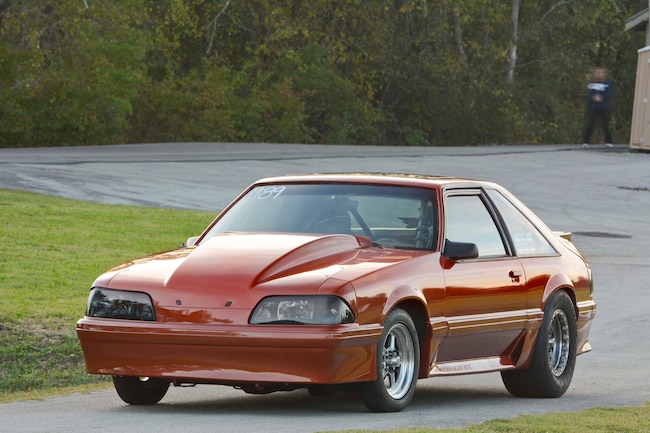 The element of surprise is nearly non-existent in today's car community. It takes a pretty crafty dude to fool a crowd of gear heads, but that's exactly what happens every time this 1990 Ford Mustang hits the track. We know what you're thinking—"an aggressive looking Mustang on a 275 drag radial isn't exactly a sleeper" and you're partially right. The Fox body platform is so successful at drag racing that it raises your expectations, even when you see a stock suspension car on a relatively small tire. Jarred Hicks built the car and it has progressed from street car, to street/strip car, to a pretty serious stock suspension drag car. The car has been on quite the journey, from the occasional trip to Mexico in its street car days, to bumper-dragging passes in the eighth-mile with its current setup.

Jarred didn't intend to build a sleeper, but it naturally happened as he continued to find horsepower without getting too carried away with racecar stuff. Although he admits that it is no longer street friendly, his Mustang looks like it could show up at the occasional cruise night. The car still has carpet, door panels, the stock dash, and it weighs more than his local racing class at Brainerd Motorsports Park requires, coming in at 3,150 pounds. So, just how quick and fast is this surprising Mustang? On a recent eighth-mile blast, Jarred ran a 4.85 second elapsed time at 145 miles per hour. If you need a quarter-mile reference for this to fully soak in, that would add up to approximately 7.70 seconds in the quarter. This guy is running 4's with a production Boss block and 347 cubic inches. He won't tell us all his secrets, but from what we gathered, it's a pretty simple setup with fed by 30-plus pounds of boost from a Procharger F1X.

Racers often find the limits of their equipment in spectacular fashion, but Jarred is still trying to find the limit of his small block Ford, while chasing quicker elapsed times every time it rolls out of the trailer. Pushing a combination to its limit requires a delicate balance of tuning skill and good track conditions, and it also requires the willingness to strap in and put the hammer down. The car has been on the back bumper a few times, but when it's on a straight pass, you can expect a big number. Jarred put it best when he said, "The little engine continues to surprise us each and every time it fires up and every time we go a little faster." He continued, "I can't believe it's lived this longif it never fired up again, I could not complain." With that mindset, he will continue to turn the screws a little tighter to see what this 302-based combination can do. He plans to upgrade the roll cage and make a few more changes for the 2018 drag racing season, but we're hoping he keeps the locals guessing with a combination that is much faster than it appears.

Who: Jarred Hicks
What: 1990 Ford Mustang GT
Where: Resaca, Georgia
Engine: The 302-based small block Ford starts with a Ford Motorsports Boss Block, which has been opened up to 4.030-inch, and fit with an Eagle forged crankshaft. The 3.5-inch stroke creates a final displacement of 347 cubic inches. A set of 5.4-inch Eagle connecting rods send the Ross pistons into motion, while a high-volume oil pump inside the Canton pan keeps the engine lubricated. Atop the short block is a set of un-ported AFR 220 Renegade cylinder heads. The only modification to the cylinder heads is the addition of O-rings, which allows for a tight seal, in combination with solid copper head gaskets. Inside the block is a Bullet roller camshaft, using a custom grind specified by Panhandle Performance to make the most of the centrifugal supercharger. The boosted small block features an MSD 7531 ignition box, combined with an MSD distributor and HVC2 coil. A Magnafuel 750 EFI pump and Billet Atomizer 225 injectors deliver a healthy dose of C-16 fuel. The exhaust system consists of custom headers with Magnaflow mufflers and 3.5-inch pipes.

Power Adder: Boost comes by way of a Procharger F1X, which rides low in front of the engine. It crams anywhere from 28 to 32 pounds of boost into the engine, depending on the tune-up. Jarred says that tuning his Mustang is a community effort, and he uses Big Stuff 3 to make sense of the boost, fuel and spark needed to make the car do its thing. The charged air from the Procharger snakes back to an air-to-water intercooler behind the passenger seat. From there, it enters the engine through a Wilson elbow and a Parker funnel web intake manifold, modified by Steve Chapman. Although the car has never been on a dyno, the elapsed times, trap speed and weight of the car tell us this thing is making nearly 1,500 horsepower at the flywheel.

Transmission: Ford drag racers sometimes refer to Powerglide transmissions simply as a "two speed" to keep from admitting that a GM product is in their car. The fact of the matter is there wasn't much GM equipment left behind after Marc Wells at Trans Plus 2 modified the Powerglide extensively. Power transfer is handled by a custom PTC torque converter, which stalls to 4,500 rpm on the line.

Rearend: Jarred relies on 35-spline Strange axles, a spool, and 3.73:1 gears inside a slightly narrowed 8.8 rear end housing. Chattanooga Driveline built the custom driveshaft to tie it all together.

Suspension: Lyons Custom Motorsports in Rossville, Georgia is responsible for setting up the suspension on Jarred's car. You'll notice it doesn't have a slammed stance, like most cars of its caliber. The biggest reasons for the stock-style ride height are the large tube headers and exhaust. It uses a UPR tubular K-member and control arms up front, with Strangle single adjustable shocks and Afco springs. Out back, Tim Lyons worked his magic on the stock style rear suspension, installing his custom control arms, an anti-roll bar, and Afco Big Guns coilovers. A manual rack keeps the car pointed straight, while a combination of Aerospace front brakes, Strange rear brakes, and a Stroud parachute brings the Mustang to a halt.

Wheels/Tires: Jarred's Mustang rolls on a set of Billet Specialties Street Lite wheels, measuring 15x4.5 inches up front and 15x10 inches out back. The rears feature bead locks to keep the 275/60R15 Mickey Thompson ET Street Radial Pros from slipping on the bead.

Paint/Body: A custom-mixed orange hue covers Jarred's Mustang, and the clean paint job gives it even more of a street car vibe. The only custom components are the hood and front bumper, which came from Schoneck Composites. Heath York handled the bodywork, stripping off several layers of paint, and straightening the panels. Heath painted the car using PPG materials.

Interior: Another aspect of Jarred's car that hides some of its potential is a lack of extensive roll cage. The car does have a 10-point cage, built by Zartech Race Cars in Acworth, Georgia, but most cars capable of such quick elapsed times have a funny car cage and other safety features. Jarred straps into the Kirkey seat with G-Force harnesses, and grips a Grant steering wheel, while he selects the gears with a TCI Outlaw shifter. You will find a stock dash, gauge cluster, carpet, door panels and all of the original glass in Jarred's Mustang.

Performance: Jarred originally intended to compete in NMRA True Street with a goal of running 5.90's in the eighth-mile while retaining the car's street friendly setup. He eclipsed that milestone about five years ago and hasn't looked back since. The car has now run a best of 4.85 at 145 miles per hour, with an astonishing 1.15-second 60-foot time at Brainerd Motorsports Park in Ringgold, Georgia. With this type of performance at 3,150 pounds, that means the little 347 is cranking out nearly 1,500 horsepower! 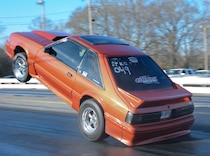 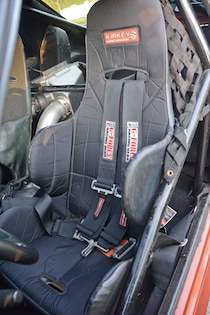