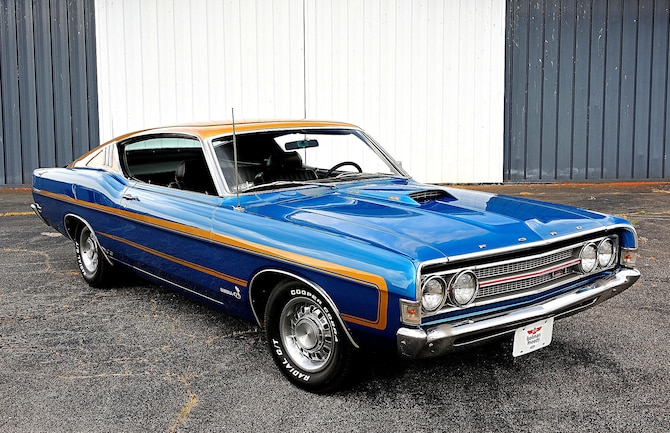 In 1969, David Pearson drove Holman Moody's No. 17 Ford Torino to a second NASCAR Grand National championship in a row. Not long after the 1969 racing season ended, Holman Moody asked Pearson to make a trip to the corporate facility in Charlotte, North Carolina, to discuss plans for the 1970 NASCAR season.

When Pearson returned home, he walked into the house, gathered his family, and announced, "You guys need to come outside." As they made their way outdoors, he said, "Look what I got."

His wife Helen, 5-year-old son Eddie, and teenage sons Rick and Larry walked outside, took one look, and stood in total shock. Parked in the driveway was a brand-new 1969 Ford Torino Cobra with the same blue and gold paint scheme as Pearson's Holman Moody race car. Eddie was especially awestruck. At only 5, though, he never imagined driving it. The same can't be said for his teenage brothers, who were already dreaming of the day Dad would let them test it out.

Ford's Lorain, Ohio, assembly plant built the Torino Cobra and applied the special blue metallic paint. It was then shipped to Holman Moody, where gold paint was sprayed to the upper portion of the car and a spoiler was mounted on the trunk lid. The shiny aluminum spoiler was not a random part from inventory or pulled from a parts bin; it was an actual spoiler from the No. 17 Holman Moody Torino race car Pearson piloted.

Under the hood was a 428ci Cobra Jet V-8 backed by an automatic transmission. The Torino was originally built with 3.70 rear gears, which Pearson changed to 3.10s for highway driving. The interior was fitted with bucket seats and a column shift.

During the 1970 NASCAR race season, it was not unusual to see Pearson pull up to the entry gate at various race tracks in his Torino Cobra. According to Eddie, his father would load the family into the car and they'd make their way to the races at Darlington, Charlotte, and Atlanta. They also took several vacations in the car during the early 1970s. For a time, it was the family's daily driver.

The Torino Cobra has always had a special place in Eddie Pearson's heart.

"The very first time I saw the car [it] blew me away," he says. "I thought, This is like my dad's race car, and from that day on, no other muscle car meant anything to me. I can't recall anything from my childhood that made such an everlasting impression on me. There I stood staring at the '69 Torino Cobra with my only thought being, That's my father's race car."

Eddie said he rode in the front and rear passenger seats only a handful of times during his grade-school years. Usually he would go to his special place on the rear package tray. The fastback Torino provided the perfect place for a 5-year-old to lie down, settle in for the ride, and check out the world through the large panoramic glass. Being little had its advantages, as Eddie was the only one in the family who could fit in the compact area.

It was common for Eddie's mother to drive him to school in the Torino. Helen Pearson loved the car and drove it to run errands, but its rarity intimidated her. She always took extra care to make sure nothing happened to the Torino when she drove it.

Eventually Eddie's teenage brothers did get their hands on the car. They drove it to high school regularly, and rumor has it the car did a little stoplight-to-stoplight racing on the local streets in Spartanburg. Then one day David Pearson spotted scratches on the passenger-side door glass from an apparently envious student or someone who wanted to make his mark on the special Torino. In the mid 1970s, it was taken out of active duty and parked in secluded spot within the Pearson racing garage, then moved to their current location in 1986.

Along the way, the Torino sat outdoors under a carport during construction of the Pearson garages. Rain water running between the hood and fender and then dripping onto the front bumper tarnished the chrome plating in two circles on the left and right side. Since the car is unrestored and mostly original, the stains remain on the bumper to preserve the car's originality. Eddie Pearson looks at the water stains as a reminder of the car's early outdoor life.

Over the years, Eddie took a special interest in the car. He learned how to care for it and performed routine maintenance to make sure it was preserved. After acquiring his driver's license, he asked his father if he could drive it and was given permission to take it out for regular drives.

David Pearson had a pilot's license and flew his own Piper Aztec airplane until moving to a Bell Jet Ranger helicopter. He and Eddie would drive the Torino to the Spartanburg airport, park it at the hangar, and then set off in the Piper Aztec. One day Eddie asked his father if he'd teach him how to fly. It was the start of some special bonding time between father and son.

During a particularly special father-son moment, Pearson surprised Eddie when he handed over the title to the Torino Cobra. Bewildered, Eddie asked, "What do you want me to do with this?" The elder Pearson took the title back, laid it on a table, and went about the process of filling out the back side to transfer it to Eddie. After filling it out he handed the title to Eddie and said, "You have always had a twinkle in your eye when it came to the Torino, and I have noticed how you have taken care of it all these years."

"When he handed me the title I was in shock, like the day he showed it to the family after he drove it home from Holman Moody," says Eddie. He took the title and placed it in a safe, where it remains, uncompleted. Eddie has no plans to formally transfer the title of his dad's car.

The special Torino has been cared for using the same approach as maintaining one of the race cars. Aside from belts, hoses, tires, battery, and fluids, the car remains original.

Periodically, Eddie takes the car out to keep the fluids circulating and the engine operating. When people see the Torino Cobra for the first time, their curiosity is piqued. Many who pull up next to Eddie at a stoplight roll down the windows and ask him the usual questions: "What is that car?" and "Who owns it?" He has an unusual reply that probably catches them at least a little off guard. "I tell them it's mine, given to me years ago by my father, David Pearson."

The Lorain Assembly Plant applied the special Blue Metallic paint, then shipped the one-of-kind Torino to Holman Moody, where the iconic gold paint was applied to the roof and decklid, just like the No. 17 Holman Moody Torino race car.
The decklid spoiler is an original part from one of the actual Torino race cars David Pearson piloted for the team. This is likely the only street-driven car to carry one of these rare parts.
The Torino is powered by a 428 Cobra Jet with ram air. The black seal around the air cleaner compresses into a cutout in the hood, then the flapper door opens to pull fresh air into the motor.
The black vinyl interior remains in original condition, with the exception of the steering-wheel wrap that Eddie Pearson added years ago to preserve the wheel.
Cooper Cobra radials are mounted on the original chrome-plated steel wheels. Eddie recalls Goodyear Wide Oval white-letter, bias-ply tires on the car when his father brought it home from Holman Moody. The Torino wears both GT and Cobra emblems, which were distinct models in 1969. Per the car's VIN it is a GT, but those associated with it, including Holman Moody staff and the Pearson family, have always considered it a Cobra, in homage to the car Pearson raced in 1969.
Pearson's Torino retains its factory-installed headlights. Note the tarnished spot on the top of the bumper, which dates back to the early 1970s when the car sat outside. Rain water would run down between the hood and fender opening then hit the bumper, much like a waterfall. This (along with a similar blemish on the other side of the bumper) has been left as-is to preserve the original bumper and the car's history.
Since the Torino is unrestored, it retains its original factory stickers, markings, and inspection stamps, including this No. 18 written in grease pencil and a yellow paint inspector stamp on the underside of the driver-side hood panel.
Inside the trunk are the original Goodyear F70-14 bias-ply spare tire, bumper jack, and trunk mat. Note how the gold paint on the roof and tops of the quarter-panel taper down into the deck channel. The look is clean and original to the Holman Moody Torino race car.
This Ford advertisement appeared in the Michigan International Speedway Yankee 600 race program in 1969. David Pearson poses with the Holman Moody No. 17 Torino surrounded by all of the hardware he'd won while piloting the car for Holman Moody in 1968 and 1969. Pearson went on to win the Yankee 600 race on his way to a second consecutive NASCAR Grand National Championship. 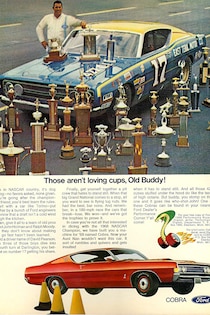 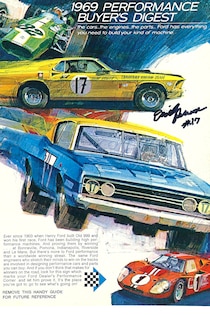 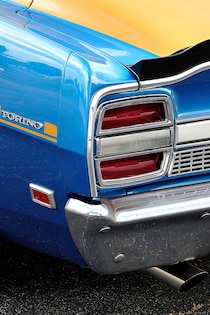