Driver Hubert Platt was on top of the drag racing world in 1969. Known for his on-track showmanship and cars lettered with his "Georgia Shaker" nickname, Platt had risen through the ranks, hitting the big-time in 1962 as a Chevrolet Z-11 teammate with "Dyno" Don Nicholson before going professional with a Ford Thunderbolt in 1964. That attracted Ford's attention, and in 1966 he landed a factory ride in a Holman-Moody built long-nose Mustang followed by a '67 427 Fairlane in the Super Stock class. In late 1968 when Ford decided to promote its drag racing clubs, not to mention the new Muscle Parts program, they brought in the popular Platt as part of a six-car Ford Drag Team.

To cover the United States, the effort was split into two teams—east and west—with Platt selected as the captain of the Eastern team. He drove one of two '69 Mustangs—a 428 Cobra Jet SportsRoof for Super Stock competition and another powered by a 427 SOHC for match racing—while fellow Georgian Randy Payne drove a Super Stock CJ Torino. For the Western team, Ed Terry drove the Mustangs with Richard Wood in the Torino. Eastern team cars were blue with white; western cars were the opposite, white with blue. Both teams used modified Ford ramp trucks (see this month's "Rare Finds") to haul the Torinos with one of the Mustangs, depending on the type of race, following behind on an open trailer. 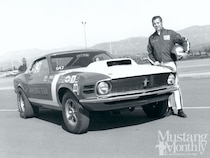 In addition to the exposure from high-profile Super Stock and match race competition, the teams also scheduled seminars and helped set up Ford Drag Clubs at dealerships around the country. "We went to dealerships during the week and raced on the weekends," Platt told us. "We carried four boards with all kinds of high performance parts on them. We'd tell the kids what to use and how to use them."

While the Super Stock Mustangs and Torinos were used for NHRA class racing, the Cammer-powered Mustangs, recognized by their large Boss 429-style hood scoops, were strictly for match racing against other popular drivers of the day, like Ronnie Sox from Sox & Martin and Pontiac's Arnie "Farmer" Beswick. According to Super Stock magazine, Platt's 427 Mustang was capable of 9-second quarter-mile ETs at over 140 miles-per-hour.

When Ford introduced the '70 Mustangs in the fall of 1970, the Drag Team Mustangs were updated with '70 noses and tail panels, along with striping that more closely resembled Larry Shinoda's wild stripes on the '70 Boss 302s.

When Ford abruptly discontinued its racing operations in 1970, Platt sold his match race Mustang to Tom Sutton in nearby South Carolina. Sutton continued match racing the Mustang with a Cobra Jet engine before retiring it later in the 1970s. In a stroke of luck, the driver of a new-car hauler had seen the old Georgia Shaker Mustang at Sutton's shop. During one of his deliveries to Georgia Ford dealer Jacky Jones, an avid Ford performance enthusiast and collector, the driver mentioned the Platt Mustang. Jones soon rescued the car and later traded it to restorer Bob Perkins in Wisconsin.

"I've owned the car for over 20 years now," Perkins said. "It sat outside for a long time so Sutton's paint job was faded. But it didn't have any rust. I've been collecting parts since I've owned it and finally found the time to restore it."

Widely recognized for his showroom restorations and consulting for Mustang Club of America concours, Perkins tackled the restoration with his usual attention to detail. In fact, the Georgia Shaker Mustang is much nicer today than it was when Platt was running the match racing circuit in 1969-1970. But Platt is quick to add, "It was beautiful when we first got it from Holman-Moody in 1969."

Restoring an old race car presented new challenges for Perkins, who specializes in knowing how Mustangs came off the assembly line, not how they were prepared by race shops. As a match race car, the Platt Mustang was equipped with many special components, including fiberglass doors, fenders, hood, and trunk lid. Perkins points out that the fiberglass molds were taken right off the factory sheetmetal; even the stamped date codes transferred over into the fiberglass pieces.

Unlike most old race cars, much of the original equipment, including the "trick parts," as Perkins calls them, was still with the Platt Mustang. Perkins contacted former owner Sutton and was able to retrieve the original Lexan side windows, tachometer, and driver's seat. Unfortunately, the Holman-Moody/Stroppe-built 427 Cammer was long-gone, so Perkins put together a new engine using aluminum SOHC heads from former racer George Montgomery, original race headers, and a Cammer Tunnel-Ram intake that was still in Platt's possession.

From the VIN, Perkins was able to obtain a Marti Report to learn that the Mustang started life as 428 Super Cobra Jet SportsRoof before being sent to Holman-Moody, along with the other Drag Team Mustangs and Torinos, for conversion into drag cars.

Now 81, Hubert Platt is enjoying his renewed association with his old match race Mustang. Perkins debuted it at the MCA Grand Nationals in Mustang, Oklahoma, then displayed it at the Musclecar and Corvette National in Chicago last November with Platt and former members of the Ford Drag Team in attendance.

Perhaps it even got Platt fired up again about driving. He tells us that he recently renewed his racing license and plans to start match racing again in a new Cobra Jet Mustang from Ford Racing.