Bob McLaughlin couldn't give this '76 mach 1 up, and for good reason 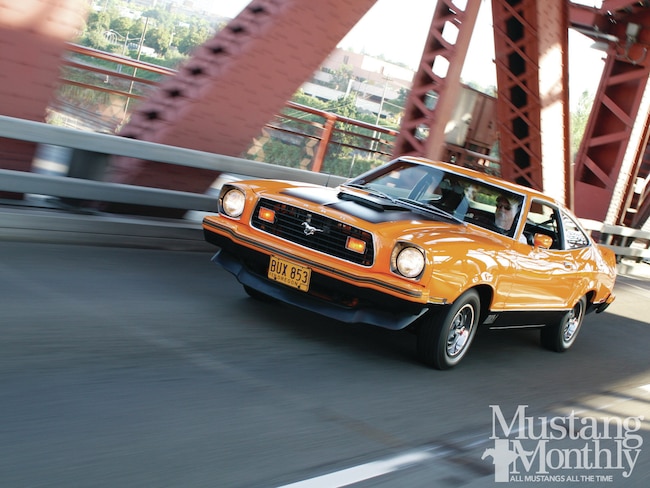 Bob and Vicki McLaughlin are dedicated Mustang fans, and yet you might say the couple has opted for a road less traveled theme when it comes to the cars they collect. Front and center is the '76 Mach 1 featured here, but the McLaughlins also own '76 and '77 Cobra IIs, and a '98 Cobra daily driver. On top of this, Bob sought out and helped his father with a sweet '73 convertible ("Worthy Diversion," August 2012 issue), so you can see the interest isn't limited to the most popular ponies of our hobby. It's surely not for a lack of appreciation for all Mustangs; rather it's more a matter of opportunity and not wanting to see oneself coming and going.

Surely the presence of a Vista Orange '76 Mach 1 is an unusual sighting at any venue, so Bob and Vicki have a unique corner of the Mustang world nailed down. We caught up with this one near the McLaughlin's home near Portland, Oregon, and were enamored by what had to be one of Ford's most appealing rides of the era. Okay, we'll admit to preferring a 302 to the 2.8L V-6, and frankly Bob does as well, yet there's a good chance this '76 wound have never entered the family had it been equipped with eight cylinders. Truth be told, economy was one of the factors Bob had in mind when he went looking for a car for his teenage daughter in 1996. We'll let Bob pick it up from here.

"I thought I would buy Hollee an economy car, probably a typical rice-mobile. Then I spotted the Mustang II for sale at a farm house. I called the seller and found out they were the original owners, so I purchased it for $1,500--probably too much for a car with 65,000 miles and a neglected engine and exterior. I brought it home and my daughter hated it, but I had a vision to make it look better. I cleaned it up, replaced wear items, installed a rebuilt V-6, and blacked out the hood and headlight areas much like a '69 Boss 302. When Hollee saw it, she really changed her tune and drove it for four years and 30,000 miles during high school and college. When she wanted to trade it for something newer, I said 'Give me the keys please.' There was no way I was going to let it go." 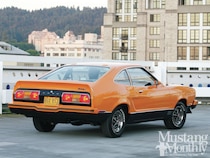 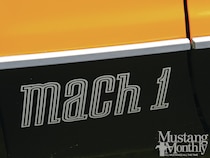 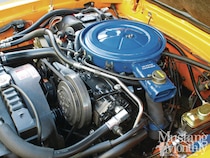 With the Mach 1 back under his control, Bob embarked on a second round of work which led to the results seen here. Ron Morfitt at Jerry's Custom Paint straightened the body before applying a fresh coat of PPG base/clear in the original hue, and again went with the Boss inspired blackout treatment. Bob himself spent countless hours under the hood restoring the 2.8L and surroundings to a like-new appearance. Inside, the upholstery was restitched where necessary by Scotty's Auto Upholstery. What you see here is original seating material in the Mach 1's standard Luxury Interior Group.

Beyond the previously described blackout treatments, the McLaughlins took a few other liberties when making the '76 their own. Take, for instance, the spoilers and hood scoop--while they look absolutely factory on this car, Bob tells us that such go-fast inspired add-ons were Cobra II only in 1976. Likewise, the double pinstripes at the beltline should technically be white rather than a matching orange, but Bob wasn't hung up on that level of correctness. He did what he liked, and it's hard to argue the point.

Apparently we're not the only ones who are impressed with Bob and Vicki's '76 Mach 1, as it scored a MCA Gold in Concours Driven at the 2011 Mustangs Northwest Roundup in Bellevue, Washington. As an aside, Bob brought to our attention that an orange near-twin to his car played a leading role for the '77 Mustang sales brochure. Sure enough, it seems great minds think alike--Ford thought the orange and black Mach 1 made for a great look as well. 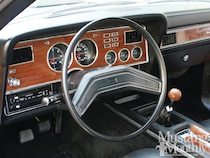 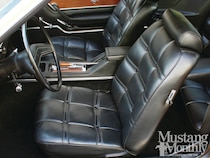 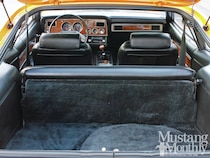 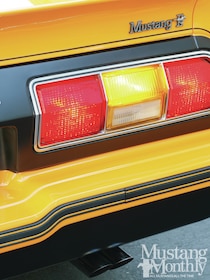 Farrah Fawcett and the other ladies weren’t the only hotties on Charlie’s Angels. Take a look at this 1976 Ford Mustang.