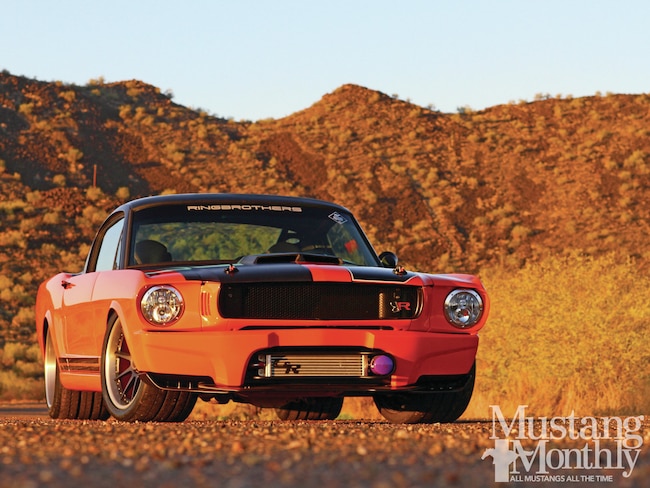 It's been nearly 10 years since Jim and Mike Ring came crashing into our Mustang party. With their skilled bodywork, master detailing, and fascinating creativity, the two Wisconsin brothers have changed the course of Mustang restomods with their builds, which sport names like Kona, Reactor, Dragon, Copperback, and Bail Out. Former Mustang Club of America president Bill Dillard once described the Ring Brothers' creations as "Mustangs that ran into a street rod."

While the Ring brothers, or "Ringbrothers" as their company is called, have built other types of cars, including Camaros, they have become known for the Mustangs that they traditionally debut each November at the SEMA Show in Las Vegas. Last year, they unveiled the Producer, an eye-popping orange '65 fastback that may be the most radically modified Ringbrothers' creation yet. Not surprisingly, Ford Motor Company presented Ringbrothers with its Best of Show Corporate Design Award during SEMA.

Like other RB builds, the Producer is undoubtedly a Mustang. But if you look closely, you'll notice that the body has been widened by four inches, two inches on each side, which explains the "65+4" emblem on the rear panel.

"It's amazing how many people at SEMA asked what we had done to it," says Jim. "They knew something was different but couldn't figure it out." 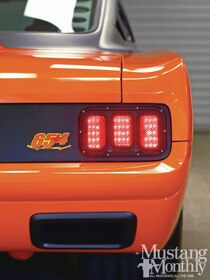 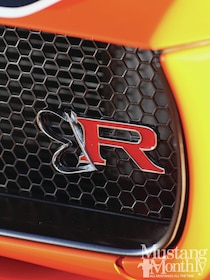 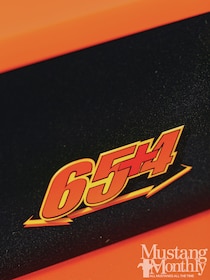 While most wide-body Mustangs are widened at the center, Jim and Mike took another approach. "We didn't want to cut it down the middle because we had already created a carbon-fiber roof skin," explains Jim. "So I said, ‘How about we cut the quarters, doors, and fenders to add two inches to each side?' That way, the cockpit would stay the same but the overall car would be four inches wider."

The Ring brothers plan to offer a kit that will allow anyone to build a wide-body '65-'66 Mustang. It will include the wider doors, fenders, quarter panel end caps, front and rear valances, headlight buckets, and bumpers. That way, the only required sheetmetal work is widening the quarter panels and rockers.

The more you look at a Ringbrothers' car, the more neat things you discover. On the Producer, you'll find billet door handles, fuel filler in the driver's side quarter window vent, and custom instruments. In place of the Mustang's gas cap on the rear panel, the Ringbrothers added a round battery kill switch. The small louvers adjacent to the grille house the turn signals. There's a full belly-pan underneath, and both the hood and roof are carbon-fiber.

The purple canister visible in the lower grille opening is the oil filter. One of the car's primary sponsors is Royal Purple, so the Ringbrothers asked C&R Racing to mount the oil filter on the grille-mounted oil cooler to display the Royal Purple filter front and almost center. "Sure makes it easy to change the filter," Jim quips. 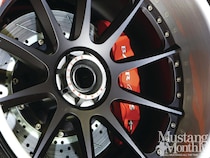 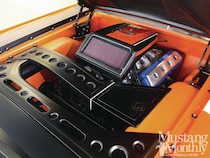 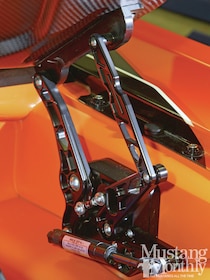 Ringbrothers even designed the three-piece wheels, which were built by Forgeline. On the Producer, the pin-drive wheels mount with a single nut, also designed by Ringbrothers. The RB3C wheels can be purchased from Ringbrothers in a variety of sizes and with standard lug-nut mount in addition to the center lock nut version.

One thing that hasn't changed is the grille, an area that Ringbrothers left alone so the car can maintain its Mustang heritage. "When you start messing with the grille, you can turn it into a freak," Jim says. "I'm not saying that you can't machine one, but it's got to look like it did originally. That's the original '65 Mustang grille in the Producer."

Under the hood, Jim and Mike stepped up the power with a Keith Craft 427 stroker based on the 351 Windsor small-block. They wanted old-school power, so Craft built the engine the old-fashioned way–with high compression–to reach a naturally-aspirated 740hp. "It requires 110-octane fuel," says Jim. "But it runs hard. We've built a lot of Mustangs and this is the scariest one I've been in."

Because the engine is set back seven inches, the custom air cleaner was designed with the filter on the front to pull cooler outside air from the functional hood scoop. 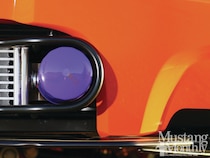 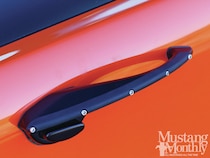 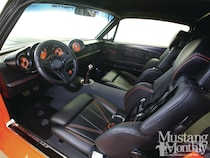 For the Producer, the Ring brothers started with a one-owner '65 fastback from California, then proposed the project, along with its budget, to owner Gary Bowers, who saw the car for the first time when it was displayed at the Mothers booth during last January's Barrett-Jackson Collector Car Auction.

Jim admits they went over-budget with the build. "We always try to out-do what we've done before," he says. "We'll laugh at some of the ideas we come up with. But when we start to run out of ideas, we'll go back to the ones we used to laugh at."