Denny Enochs is a Mustang enthusiast like the rest of us. He likes and has owned a number of early Mustangs. But when he got the chance to buy a nice, mostly original '78 King Cobra, he followed through with the deal.

Eighteen years ago, Denny acquired the most collectible Mustang II of all.

Ford built a scant 4,313 of the special King Cobras in the final year of the Mustang II, so the odds of finding one unmolested were pretty low, especially in such a flashy color combination with the ultra-desirable T-top option.

Denny says the 60,000-mile car looked great except for faded paint and stripes along with a little surface rust on the body. The 302-2V looked stock and ran great. Likewise, the interior was sharp except for faded plastic inserts around the back hatch. The wheels had the typical "ashen"appearance.

At first, Denny wasn't out to restore to concours. He just wanted to get the car looking good for occasional driving and cruising to car shows. He started with a repaint of the Tangerine Orange exterior and new stripes, including the giant Cobra snake on the hood, ala the Pontiac Trans Am of the era.

Soon Denny was off to shows. But he kept incurring point deductions due to faded plastic inserts in the back window area. Through a local paint store, Denny learned how to repaint the plastic, faded almost to white, back to the factory orange. First he removed the plastic trim. Then he stripped it with ammonia. Next, he sprayed on an adhesive to "soften it up a little"and before it dried he sprayed on specially mixed paint to match the factory color.

Denny was surprised how good the job appeared, making his interior look almost new. The one concession to stock is real brushed aluminum in front of the driver. The original Ford instrument panel was plastic. Denny went upscale because the look is the same and the brushed aluminum is less prone to scratches.

When Denny bought the car, the rear window slats were in place. He says the original owner asked the dealer to install them when the car was new. Denny added the rear quarter window covers; they integrate well with the King Cobra look and also keep sunlight off the inside back trim. 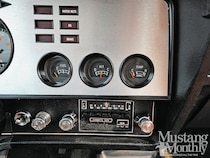 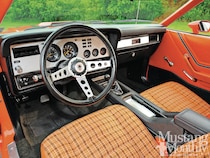 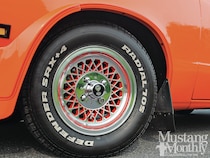 The protective clear coating on the "Lacy" aluminum wheels had turned ashen thanks to the coat of clear cracking from day-to-day use, allowing water to migrate underneath. "I found a guy who was able to remove the clear coat,"Denny says. "He told me not to put the clear coat back on or I would have the same problem in a few years. Now all I do is polish them."

Under the hood, Denny explained that the bright trim is aluminum except for the chrome cap on the master cylinder. Aftermarket headers help exhaust flow. Denny removed the emissions equipment because in Pennsylvania he can pass inspection without the air pump because he registered the car with classic tags.

Is the car popular at shows? Denny says it depends on the show, then, when pressed, adds that the car has won "50 to 60 trophies."No doubt, most of the attention comes from the factory looks. Ford designers did a great job with the front air dam, fender flares, reverse-facing hoodscoop with "5.0"decals, and blacked out trim.

Until Denny decides to go concours, he sees no reason to get down to the nitty-gritty with the details. The reason is simple. The King Cobra is already a head-turner that few people ever get to see.