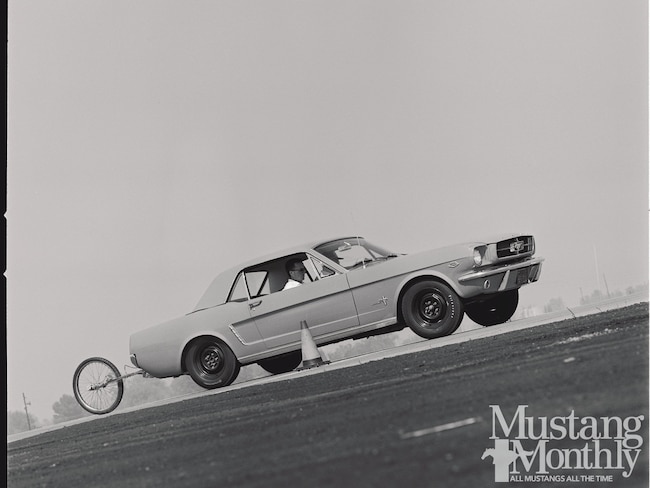 When the Mustang was introduced in April 1964, many potential buyers were disappointed that Ford’s new pony car failed to offer a performance powerplant. With six-cylinders and base small-blocks listed as the only available engines, early magazine reports often labeled the Mustang as a “secretary’s car.” However, two months later, in June 1964, the 271hp 289 High Performance small-block was added to the Mustang’s option list, making it a bonafide performance car. By the end of 1964, Carroll Shelby was spinning his magic on Hi-Po fastbacks to transform them into ’65 G.T. 350s.

With the Hi-Po already available in Falcons and Fairlanes, we’re not sure why it was a late-comer to the Mustang, other than Ford’s Cleveland engine plant may have had a hard time keeping up with V-8 demand thanks to the Mustang’s runaway success. Regardless, in May 1964, Motor Trend magazine was able to test one of the first Hi-Po Mustangs for the August 1964 issue. Undoubtably an engineering car, it doesn’t include chrome valve covers (as used on the production cars) and the 289 High Performance emblem is from the Fairlane. The complete article is included here, along with additional photography, some of it never seen before. --Donald Farr

We covered the Mustang pretty thoroughly in our May issue, after Technical Editor Jim Wright flew back to the Ford proving grounds to wring out the standard versions. It wasn’t until recently, though, that we were able to get our eager hands on their top performance model. This car, the first one on the West Coast, came to us directly from Ford’s engineering department and was equipped with every available performance option. Starting with the 271hp version of Ford’s 289 cubic-inch V-8, it had the optional handling package (heavy-duty springs, shocks, and a bigger anti-roll bar), four-speed transmission, 3.89:1 rear axle, and Firestone Super Sport 170-TW racing tires mounted on 15-inch steel disc wheels with 5½-inch rims.

Ford Engineering had told us the car was ready to roll, so we loaded up our photographer, testing equipment, and safety helmet and headed for Riverside International Raceway to see how wild the Mustang really was. For a 2,980-pound car with 271 horses under the hood, performance turned out to be impressive. After a few trial runs to decide on shift points (5,500 rpm gave the best results), we gave the Mustang its head and clocked 30, 45, and 60 mph in 3.0, 4.9, and 7.5 seconds, respectively. The car ran through our measured quarter-mile in a quick 15.7 seconds, showing 89 mph on our fifth-wheel electric speedometer as we crossed the finish line. Charging out of Turn Eight and down Riverside’s long back straight, the Mustang climbed to a top speed of 117 mph at 6,300 rpm. 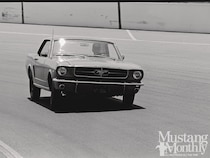 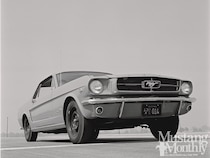 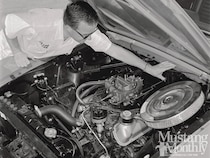 But performance in a straight line was only one of our Mustang’s good features—its adhesion, thanks mainly to the Firestone Super Sport tires, was amazing. On tight corners, we felt some understeer and a little tire scrub. But the rear end stayed glued to the track no matter how hard we pushed it. Body lean was minimal under all conditions. Ford’s quicker steering ratio (22 to 1) was near perfect for quick action and good control during fast driving. Our Mustang didn’t have the optional limited-slip differential, so during fast cornering, the inside rear wheel tended to break loose. This was no problem, though.

Added to its good straight-line performance and excellent road manners was the Mustang’s instant throttle response. Here’s one car we could actually steer with our right foot. The 3.89 axle coupled with the four-speed, close-ratio gearbox kept rpm at a right-now response level.

Our Mustang had a suspension system that was very firm and very comfortable, which means Ford has come up with quite a package for those willing to wait for it. Even with production increased to 28,800 units a month, the waiting periods are still eight weeks in some areas. But, more important, the additional performance options make the Mustang a far safer car to drive. It can be driven fast with a high degree of safety in this form.

Barreling over winding mountain roads was great fun with the car’s good road manners, precise steering, and instant throttle response. We rarely had to use the brakes or gearbox because the engine has such a wide torque range. It’d actually start from a standstill in Third, then accelerate strongly and smoothly from 20 mph in Fourth. There were no flat spots from 1,500 to 6,300 rpm, although power did drop after the tach passed the 5,500 mark. As an example of the engine’s tremendously wide torque range, we drove from sea level to the top of Mt. Wilson (5,710 feet) over twisting mountain roads, sometimes slowing to 15 mph for tight curves. We never shifted out of Fourth gear.

Gas mileage wasn’t the Mustang’s strong point. Its 10.5:1 compression meant we had to use top-grade fuel. Also, the car’s sporting nature brought out the same in those who drove it. Our top figure was 14.6 mpg during steady highway driving (between 55-65 mph), while spirited city driving gave a low of 11.7 mpg. Overall average for 1,004 test miles was 12.8 mpg, which should improve as the car loosens up.

Every car has bad points, and the Mustang’s no exception. Fit of the front fenders and hood could certainly stand improvement. The front passenger’s seat had no fore-aft adjustment, and the car’s drum brakes just weren’t in keeping with the nature of the beast. When Ford finally offers disc brakes and their independent rear suspension (Editor’s note: it would take 35 years for IRS to finally show up in the ’99 Cobra), it should really be a thoroughbred charger. A few other improvements we’d like to suggest include a dash panel designed especially for the Mustang, more head room for front seat passengers, and a bit more leg room for the back-seaters. Otherwise, it’s great. 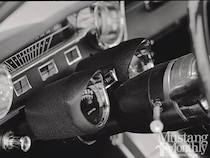 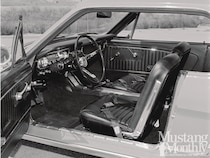 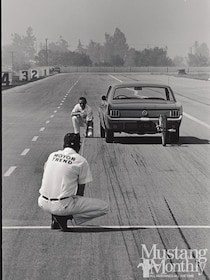 Few test cars have given us more sheer pleasure per mile than our bright Poppy Red Mustang without wheel covers (they’d hadn’t made any for the 15-inch wheels yet). And for the selling price of $3,361.45 in Los Angeles, it gives a high-performance-per-dollar value. Just listening to that engine is enough to send an enthusiast into a glassy-eyed trance.

Performance and safety go hand in hand—this Mustang had both in great abundance. Every once in a while, we get to drive a car that’s exciting as well as interesting—such a car was this special Mustang.

If you know your early Mustangs, then you’re probably scratching your head over the 15-inch steel wheels and Firestone 5.50/5.90x15 Super Sport (including the spare) tires on a '64-1/2 Mustang. First generation Mustangs weren’t available with 15-inch wheels and tires, right? Well, we’re not sure.

Obviously, the Motor Trend test car came with 15-inch rolling stock. The early '64-1/2 Mustang sales brochure (printed February 1964) does list the 15-inch wheels and tires as an option "only with the Handling Package," which is listed as available in June 1964 and standard with the Hi-Po engine. However, noted ’65-’66 Mustang judge Charles Turner has a copy of the "1965 Mustang Specifications Guide" dated February 3, 1964, and its option listing does not include the 15-inch wheel and tire. Turner also states that he has never been able to document a car as original with these wheels and tires, so apparently very few, if any, were sold. As late as May 1964 when the Motor Trend test took place, Ford was unsure of the hub cap for the Mustang 15-inch wheel.

Other than the Shelby G.T. 350, the first regular use of a 15-inch wheel and tire package for the Mustang happened for the '67 model year with the Competition Suspension Package (see “Special Ks” in the Aug. ’11 issue). Those cars used a 15-inch Galaxie hub cap.

If anyone has additional information about the 15-inch wheel and tire option for ’65 Mustangs, please contact us at mustang.monthly@sorc.com.

But performance in a straight line was only one of our Mustang’s good features—its adhesion, thanks mainly to the Firestone Super Sport tires, was amazing. 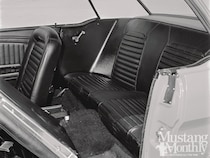 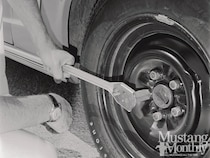 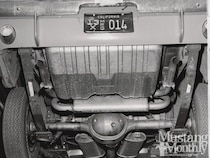