It’s hard to imagine a more coveted convertible than a rare ’66 Shelby G.T. 350 that was originally owned by a celebrity

It could be said that nearly everyone loves a red convertible. No matter the manufacturer, the number of cylinders in the engine, or the soil it was manufactured on, a red drop-top is simply one of the pinnacle color/bodystyle combinations known to man--or woman. That last part is particularly appropriate here, in that Linda Perham has a particular affinity for red convertibles, this '66 being one of two in an impressive collection that she and husband Len have assembled over the years. The other car is likewise a '66, though a highly modified driver built by Campbell Automotive Restoration--but that's a story for another time. Conversely, the example before you is unquestionably a museum piece, it being the one and only red '66 G.T. 350 convertible--6S2377.

Note that we use "the" in the above phrase very purposefully. That's right, this is a genuine '66 Shelby convertible, one of four with true significance.

Scrolling back in the annals of automotive history, most enthusiasts are aware that convertible Shelby Mustangs didn't hit the scene until '68--in production form, that is. However, four legit G.T. 350 convertibles were made for 1966 per the 2011 Shelby Registry from the Shelby American Automobile Club. Whether you call them test cars, prototypes, or styling exercises, the crux is that they certainly weren't available to the general public. In the case of the '66s, the SAAC Registry details how these were the last four cars ordered by Shelby American at the end of the model year. Each was a different color--green, yellow, blue, and of course our Candyapple Red feature car. At least three were destined for use within Shelby and Ford; the Perham's car appears to have been destined for something a bit different.

The original owner of 6S2377 was Bob Shane of the popular singing group, The Kingston Trio. In an interview with Shane for this story, he explained an early affinity for Shelby American products and how he'd bought a '63 260 Cobra and a '65 289 Cobra when new. Through these early purchases, Shane developed a friendship with Carroll Shelby. At some point after Shelby Mustangs began making a name for themselves, Shane mentioned to Shelby that he'd buy a convertible version if Shelby would build them. Shane recalls Shelby's response as positive, and that he articulated a desire for one himself. Several months later, Shane was notified that a convertible was ready for him, whereupon he personally picked it up on July 7, 1966, at San Francisco Shelby dealer S&C Motors.

An interesting aside is a factory memo that is detailed in SAAC's exhaustive registry. It not only pegs convertible production at four (once thought to be six), but identifies that one of the cars was already sold while the other three were to be used for test purposes. That memo doesn't mention which chassis number was sold, nor did Shane request a given color, but at some point it must have been determined that the red unit would go to Shane.

Surprisingly, Shane would wheel his new Shelby for only a couple of weeks, explaining, "Shortly after I got it, a friend took me to the airport in the convertible to fly out for a gig. On the way back home, he got in a fender bender on the rainy streets." Shane never saw the car again, relating that he was pretty bummed that his brand-new car had been marred "before I had even paid for it," and he simply lost interest.

One of Shane's assistants returned the car (we presume to S&C), whereupon the trail becomes more vague. Registry entries detail that S&C did some minor repair work to the car in August 1966 with a reported 3,815 miles, so somebody was clearly driving the unusual G.T. 350. On September 6, 1967, 6S2377 was sold to the Shelby dealership, Hi-Performance Motors, in El Segundo, California.

A subsequent owner had a high-end restoration performed on the red G.T. 350 convertible during the late 1980s, and it was shown at SAAC 17 in Portland, Oregon, in 1992. The Perhams purchased the car at a Monterey auction in 2001, and were thrilled by the opportunity. According to friend and consultant Mark Schwartz, the car was still in great condition, yet restoration standards and an understanding of correctness "has changed a lot in the last two decades." It was determined that a car of such significance should be brought to current standards, so a complete restoration was placed in the hands of Mike McCullough at Worldwide Musclecars in Edmond, Oklahoma, who enlisted Jason Aker and Rob Holt of American Musclecar Restorations for a large portion of the work.

With guidance from former head SAAC judge John Brown, the car was restored to the highest standards. That said, the aim was for SAAC Division II show competition, which is roughly akin to MCA Concours Trailered. McCullough chuckles when explaining what sometimes happens in SAAC Division I/MCA Thoroughbred competition: "Guys end up borrowing NOS items for one show or another--there really aren't enough of these parts to go around. The Perhams chose against borrowing parts, so a handful of wear items, such as the battery and Goodyear Blue Streaks, are reproduction items. We decided we can always go back and change out a few items if the opportunity arises."

Obviously, the end results of the recent restoration are stunning. The single-stage Glasurit topcoat has a depth and quality that can only raise our affinity for red convertibles, and the rarity and uniqueness of the car speaks for itself. Could this be the ultimate Mustang droptop? Surely it depends on your frame of reference, but we know plenty of enthusiasts who could think of nothing better.

Does Linda Perham see it this way? We hear this G.T. 350 is her favorite car among the couple's enviable collection. What does that tell you? 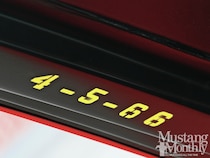 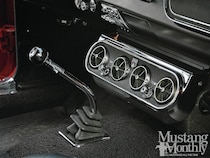 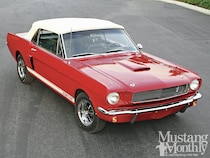 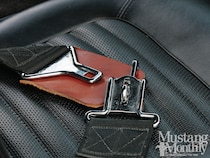 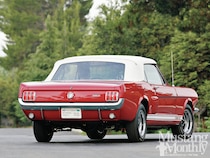