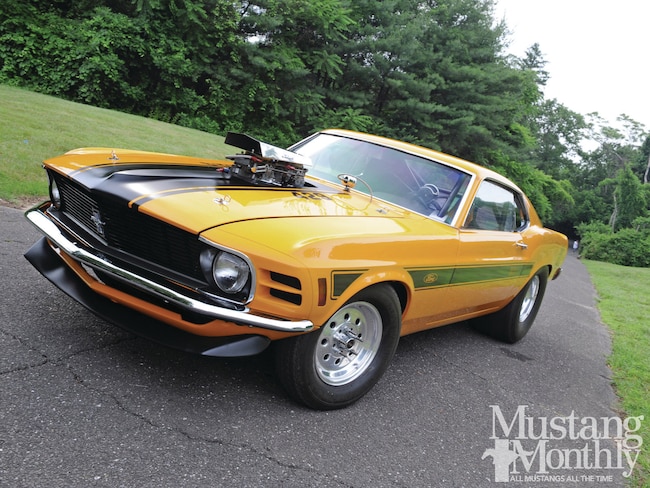 George Munsterman caused a commotion when he rumbled his '70 Twister Special Mach 1 drag car onto the concours show field at the Mustang Club of America's national show on Long Island, New York, last summer. And not just because of the loud idle, drag slicks, and twin Holleys sticking through the hood.

"Others in the class complained that my car didn't belong in concours," George says. "That's when MCA officials explained to them that it's a factory-built drag car."

George understands the initial reaction because when he first spotted the car at the Barrett-Jackson Collector Car Auction in Palm Beach, Florida, last spring, he questioned the sanity of anyone who would modify one of the 96 Twister Specials that were built for a special dealer promotion for Ford's Kansas City sales district. It was Earl Groves from the Mid America Shelby and Ford Nationals who told George about the car's provenance. Earl had seen the Twister Special's paperwork and realized that, in addition to being one of the last Twister Specials built, the car had reportedly been pulled off the assembly line for conversion into a 429-powered drag car for demonstrations during Ford's Twister Special introduction at Kansas City International Raceway on November 7, 1969.

Because the Twister drag car followed a high-profile vehicle at the auction, it did not receive a lot of promotion as it crossed the block. Most bidders thought it was just a modified Mach 1 or even a Twister Special clone. With knowledge of the car's paperwork and history, George put in the winning bid and brought the Twister to his collection in Fishkill, New York. 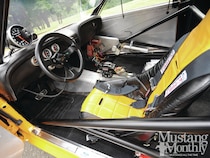 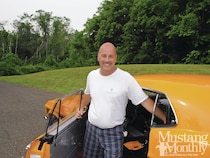 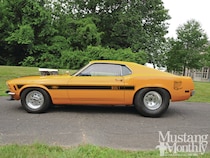 According to the paperwork, Twister Special 0F05R118919 was assembled on October 29, 1969, as one of four built on the final day of Twister production, according to Kevin Marti's Ford database. Following the trail of three invoices, we can see that the car was originally sold to Ford Motor Company in Kansas City on October 3. A month later, on November 5, it was invoiced to Dixon Auto Sales in Excelsior Springs, Missouri. A week after the Twister Special introduction at KCIR, it was sold to Rusty Eck Ford in Wichita, Kansas. The Marti Report describes the Order Type as "Local Promotion."

As most knowledgeable Mustang enthusiasts know, the Twister Special '70 Mustangs consisted of 96 consecutively numbered Grabber Orange Mach 1s that were designed for the Ford dealers in the Kansas City sales district, along with 90 429-powered Twister Special Torinos and four 351 Rancheros. Initially, all of the Mustangs were supposed to receive 428 Super Cobra Jet engines, but a shortage of the big-blocks led to the installation of 351 Clevelands in half the cars. After assembly at Dearborn, the cars were shipped to Ford's assembly plant in Kansas City where the stripes and decals were applied before the official unveiling of the Twister Special Mustangs and Torinos during a "Total Performance Day" at KCIR.

The late Terry Fritts described the Twister Special introduction on his Twister Special Registry website: "Featured attractions were special appearances by the Ford Drag Team, Ford's Total Performance Show, and Bob Tasca's High Performance Show. Morning seminars were held for the dealers and their sales, parts, and service personnel. The afternoon brought exhibitions by the Drag Teams and then a chance for participants to try their luck on the road-race course or the quarter-mile. Trophies were presented to the winners in each of the district's 13 sales zones. After a day of high-performance demonstrations, the dealers were taken to an area where the Twister Specials were awaiting the drive home or shipment to dealerships." 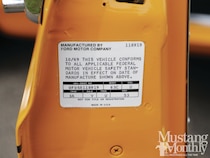 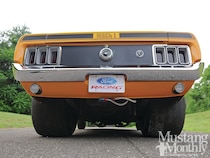 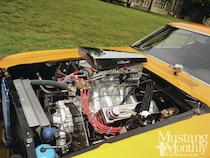 It makes sense that Ford would want a drag version of the new Twister Special for the car's introduction at a dragstrip, but George has been unable to dig up proof of his Mustang's active involvement. According to the previous owner, the Twister Special participated in the Total Performance Day as a drag car, although George has not been able to track down any records or photos of the car's involvement. Nor has he been able to confirm where the modifications were performed. Was the car modified in Dearborn before shipment to Kansas City, or was it modified after its arrival? Another question: Why was the original 428 CJ engine replaced by a 429 Super Cobra Jet? And was the engine swap and other modifications performed by Ford, possibly at Kar Kraft or Detroit Steel Tubing? Perhaps Ford wanted to promote the new 429 CJ, which powered the Twister Special Torinos and was scheduled to replace the 428 in the '71 Mustang.

Most of the race equipment is vintage, right down to the twin Holley four-barrel carbs on top of the tunnel-ram intake. The rollbars were professionally built, with the bars extending into the trunk. The hood and trunk lid are fiberglass, and the side glass has been replaced by Lexan. In the days before modern fuel cells, the smaller gas tank was constructed from an original Ford tank.

Likewise, George has no history of the car between its delivery to Rusty Eck Ford and his purchase in 2011. He's heard that the Twister spent time in storage before going into a museum. There's no speedometer to determine mileage, yet the condition reflects very little use. George says the car apparently had a repaint at some point.

Other updates also occurred over the years. The Weld wheels are certainly contemporary, while the gauges appear to be current-style Auto Meter. George himself updated a number of components in the interest of reliability and safety. For example, the vintage Mallory distributor was cracked, so it was replaced with an MSD unit. George also replaced the old, frazzled fuel line with braided hose and ensured good starts with Optima batteries in the trunk. 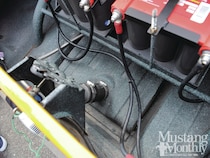 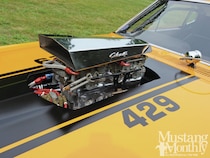 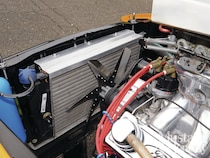 One thing is for sure: George's Mach 1 is a genuine Twister Special and one of the last four built. Less certain is the car's involvement at the Twister Special introduction in 1969. If anyone has information, please contact us at mustang.monthly@sorc.com.