Once a $100 parts car, this handsome hauler was built to replicate the Intermeccanica Mustang concept wagon from 1965 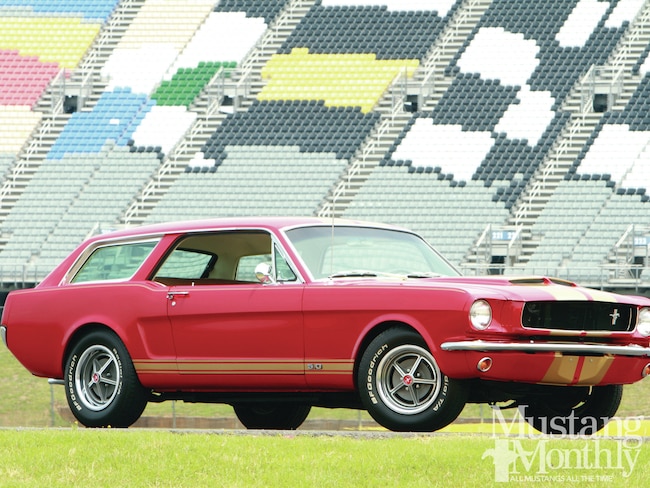 In 1965, three men conspired to convert Mustangs into two-door station wagons. The single green prototype they produced has inspired several replicas over the past four decades, such as this Shelby-esque red-with-gold restomod owned by brothers Jeff and Larry Trepel. 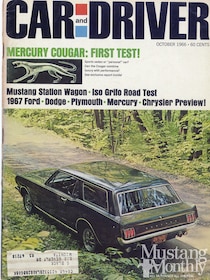 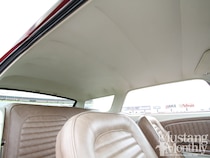 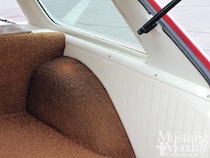 Magazines of the Car and Driver and Motor Trend ilk praised Cumberford's design and Intermeccanica's execution, but the universal love fest wasn't enough to will the car into production. Ford Motor Company, which had cobbled together its own two-door wagon design study early in the Mustang's development, was selling coupes, convertibles, and fastbacks as quickly as its three factories could build them. The marketing department could not justify the expense of a fourth body, but Mustang enthusiasts never forgot the Intermeccanica wagon.

In the early 1990s, Joe Kamp, an industrial wire salesman and self-taught car fabricator, offered a friend $100 for a new bumper that was sitting with a disassembled '65 Mustang project. The friend said he could purchase the bumper only if Kamp agreed to tow away the rest of the car as well.

The parts puzzle sat in storage for three years until Kamp saw photographs of a homemade Mustang wagon and decided to make his own. He bought a roof from a parted-out Mustang coupe, some Galaxie station wagon components, and a Fox-body latch mechanism. Like other wagon replica builders, Kamp wisely avoided the Intermeccanica Mustang's complex folding tailgate problems by fashioning a single-piece, top-hinged hatch from part of the original coupe's trunk lid and backlight.

With the top framed up and the hatch sorted out, Kamp spent the winter cutting rust and addressing the old car's basic restoration needs. He dressed up the new cargo area with a carpet-covered wood floor and his wife sewed side panels to mimic the original Ford door panels. Two white headliners were combined to span the distance from windshield header to rear hatch. Camel-colored vinyl covers a rare bench seat, which only seems appropriate for a wagon. 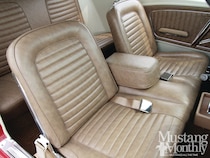 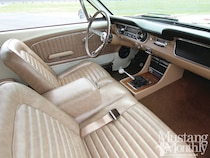 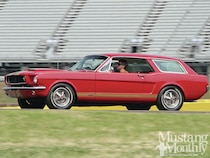 As the build progressed, Kamp applied some Shelby touches, including a pair of gold LeMans stripes over Rangoon Red paint, a set of 15-inch Mercury Marauder rims (resembling the '67 Magstar units) with 215/70x15 modern radials, and an aftermarket fiberglass hood with '67 Shelby-like scoops.

He ditched the A-code 289 for a '94 Mustang 5.0-liter engine and T-5 five-speed manual with a Hurst shifter. Kamp spent a lot of time mating the late-model filter airbox to the first-generation inner fender, and a friend helped him figure out the wiring harness and sensors. Modern amenities include power steering, front disc brakes, and air conditioning. The chassis was strengthened in front with a Monte Carlo bar and strut tower-to-firewall braces; the rear received beefier control arms and a reinforced subframe. 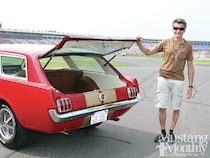 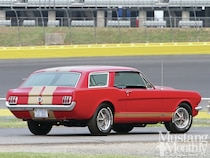 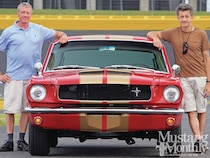 Kamp estimates it took three years to build his Mustang, or three times as long as Intermeccanica's crew took to convert the Barney Clark car. Kamp debuted his creation in 1999; it spent the next five years as a show car and weekend driver before a dealer offered enough incentive for Kamp to part with it.

That dealer put the Mustang through an auction, where it was purchased by John O'Quinn, the Texas lawyer whose 800-car collection (some sources put that total in excess of 1,000) included 23 Duesenbergs and 11 Rolls-Royce Silver Ghosts. The Kamp Mustang would likely be part of a planned permanent museum today were it not for O'Quinn's fatal 2009 car crash. In March 2010, RM Auctions held its Classic Cars of Fort Lauderdale sale, in which the Mustang wagon and 149 other O'Quinn vehicles were offered at no reserve. The Trepels, recognizing the uniqueness of the red-and-gold wagon, made the winning bid of $29,700.

Since then, the brothers have enjoyed their Mustang wagon the way Barney Clark and Joe Kamp intended--as a stylish ride that grabs attention everywhere it goes. What started its second life as a $100 pile of parts now receives shocked stares that are priceless.

It doesn't seem right to call our featured Mustang a station wagon. That term belongs to the dull four-door barges that floated around America's highways in the decades before minivans became our official kid and grocery haulers.

To borrow from the Europeans, this one-off restomod with extended roofline is best classified as a "shooting brake." In the days before motorcars, a brake was a carriage frame used to train new farm animals--breaking them in, as it were, which explains why we sometimes see it spelled that way. When fitted with closed bodies to transport sportsmen, dogs, and guns around large tracts of land for hunting, the rigs were called shooting brakes.

In early motorcar form, the shooting brake formula was elegantly simple: Replace the top with a practical box shape but keep everything from the windshield forward and body line down. Many prestigious automakers such as Rolls-Royce offered custom-built shooting brakes on their luxury car chassis before World War II in low volume for wealthy clients. 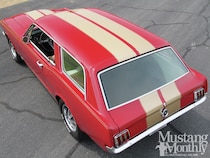 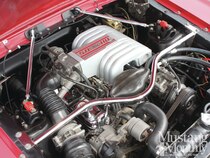 After the war, converting powerful two-door gentleman's coupes into stylish wagonettes enjoyed something of a revival. Aston Martin company owner David Brown proved how beautiful this concept could be when he authorized the construction of a dozen DB5 shooting brakes in 1965. That's right. James Bond's most famous Aston could be ordered with enough room to carry an adult foxhound and a pair of Purdey shotguns. How very English!